Fresh off an LGBT club tour, (We Are) Nexus performs live at this year’s OKC Pride celebration. 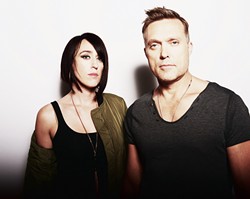 Fresh off an LGBT club tour, (We Are) Nexus performs live at this year’s OKC Pride celebration.

“I had produced dance music on the side for years,” Gunn said. “I loved the market, and I had wanted to take the initiative at some point to jump into electronic dance music (EDM). I heard Carmen sing, and she had such a great tone.”

The two decided to collaborate. In college at the time, Rainier said her experience of EDM prior to working with Gunn was “warehouse raves in [her] teenage years in LA.”

Part of those growing years included a fascination with Garth Brooks.

“Nick is shocked every time a Garth Brooks song comes on because I know the words to every line,” Rainier said. “It was his performance as much as anything that I loved, though. When he took the stage, you just wanted to watch him.”

Rainier’s musical education included some work with cello, choir and musicals, but she opted for acting in her teenage years.

After extensive world travel, she moved to Santa Barbara to pursue a global studies degree.

Gunn, also known as Nicholas Gunn, is a classically trained musician who was born in England.

He is best known as a flautist. During the 1990s, Gunn was a popular New Age artist who also worked in World Music.

The market shifts in the early to mid-2000s pushed Gunn to think more about mainstream music.

“I wanted to produce more mainstream music,” Gunn said, “and I know you can argue whether or not EDM is mainstream, but it’s certainly moving into the mainstream.”

The duo released their first EP, It Feels so Good, in 2013. The accolades came quickly, and the attention Rainier generated was sort of what is expected for females in the male-dominated EDM industry.

“My experience isn’t typical of many females in EDM,” Rainier said. “I didn’t start as a DJ like so many did. I have always had a producer by my side. I take an ‘ignorance is bliss’ approach to social media and publicity. I’ll post stuff, as does Nick, but he reads most of it. I just don’t.”

For this year’s OKC Pride celebration, (We Are) Nexus performs tracks from its latest EP, They’ll Never Stop Me, which features remixes from Bimbo Jones and Jose Nunez. It also will play songs from its 2014 EP Better Off Without You.

The duo’s set kicks off at 8 p.m. Saturday. The show follows the OKC Pride Arts Festival, which runs 10 a.m.-8 p.m. Saturday and Sunday along the strip. OKC Pride 2015 culminates with its annual parade, which takes over the strip at 6 p.m. Sunday.

One of the things Gunn brings to EDM is his classical and acoustic background.

“His rig looks like a DJ rig,” Rainier said, “but he’ll have keys and a drum trigger back there as well.”

Gunn said he tries to add live instrumentation as much as possible.

“Since I’m a flautist, I’d like to eventually add woodwinds, too,” Gunn said.

The duo performed at Tampa Pride, and Gunn said sees a new pride crowd emerging as the “country — maybe even the world — wakes up” to LGBT rights.

“The crowds at pride concerts are very diverse now,” Gunn said. “These events are a fucking blast, and no one questions any more why you would go to a pride show.” Print headline: Power pair, (We Are) Nexus is the center of attention at Saturday’s OKC Pride Week celebration.

OKC Pride 2015 runs through Sunday along the 39th Street strip at 39th Street and Pennsylvania Avenue.