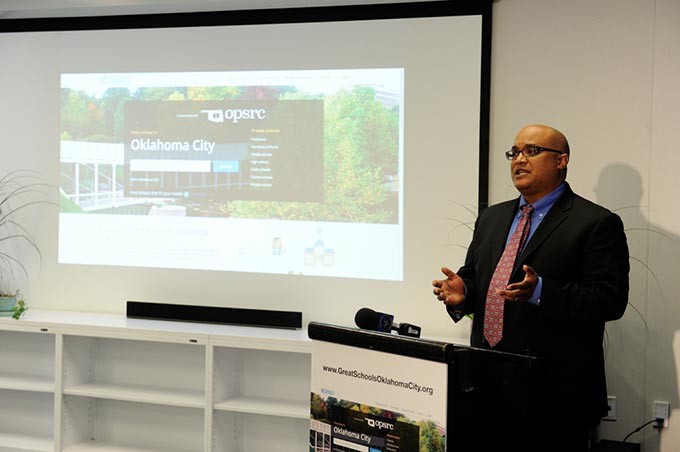 A new website hopes to play matchmaker for parents and schools.

GreatSchoolsOklahomaCity.org officially launched Tuesday with a demonstration at the office of the Oklahoma Public School Resource Center (OPSRC) in Oklahoma City. The website is a joint venture between Great Schools, a national database of schools, and the OPSRC.

During a demonstration of the new website, Leo Olebe, vice president of Great Schools, showed how parents can enter their location and what school characteristics are important to them, ranging from study subjects, sports and other extracurricular activities. Based on that information, a list of schools is generated, each with a quality rating and additional information about each school, including demographic data and submitted reviews from parents, students and teachers.

“There is a lot of information and resources we are able to provide,” Olebe said. “In addition to school information we also want to provide resources for parents. Overall we are trying to build this really comprehensive resource ... allowing parents to ask ‘what is the best school for my child?’”

During the official launch, Oklahoma City Mayor Mick Cornett was on hand and praised the site as a way to help parents moving to the city gain a better understanding of what school might be right for their family.

“For a lot of people they base their opinion [of schools] on a realtor or maybe one other source,” Cornett said. “We are basing a lot of those decisions [about schools] on perceptions. I think it’s great that we have a source now that provides some sort of data-driven [options] in case a perception is not true.”

Rating public schools has been a controversial issue in recent years as the state’s A through F grading system has been criticized by many educators who feel it is a faulty way of rating schools.

“A through F is one piece of data that is [on the website],” Bushey said. “I know A through F is not popular in public schools. This is a chance to say these are all of the other aspect of our schools that should be considered.”