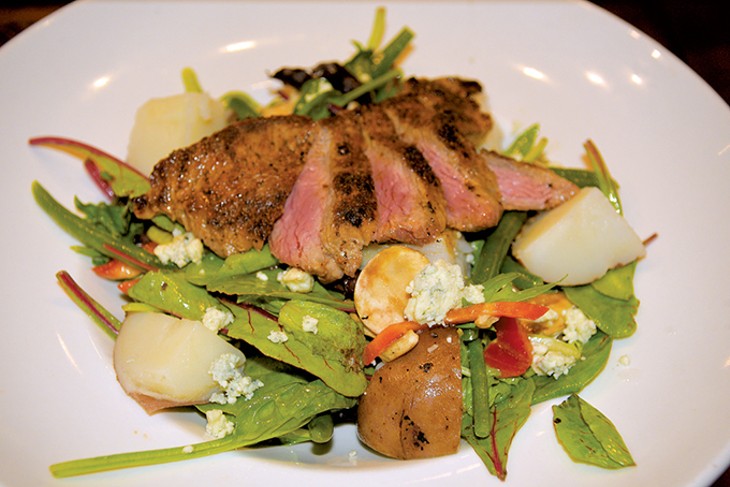 The new location is in the former Sophabella’s at 7628 N. May Ave. and opened in early May a few blocks north from his wife’s Vito’s Ristorante, where the original Irish pub shared a wall.

Sean Cummings’ Irish Pub closed in October 2014 under the property owner’s request and became seafood concept Land & Sea and, most recently, Bacon, which Cummings closed to take its staff up the road.

“The three years we were closed, I figured someone else was going to open an Irish Pub [in the city],” Cummings said, noting that Oklahoma City’s large Irish-heritage population was in need of a cultural base.

Irish heritage comprises the second-largest ancestry group in Oklahoma’s population, according to the 2010 census.

Cummings is a first-generation U.S. citizen; his father hails from Galway, Ireland, and his mother grew up in nearby County Clare. Cummings operated Café Nile in his native Kansas City before moving to Oklahoma City around the turn of the century.

“I owned a top-100 American restaurant [Café Nile], but [Sean Cummings’ Irish Pub] is way more well known here. Isn’t that crazy? … Anyone who is going to Ireland seems to come here a couple of weeks before to get advice on where to go,” Cummings said. “If they’ve been, they want to see if we’re good enough to keep up.”

Reopening the pub has been a goal for Cummings since the first one was abruptly asked to change the concept by the property manager Phil Pippin.

“We never missed rent, and there were never fights or calls to police. Something weird had happened. We had one argument five years earlier, but it wasn’t enough to kill a contract,” Cummings said. “We do feel some version of vindication; I love that we’re catty-corner from [the old location], and it is going quite well.”

"I have no idea why they call it black and white pudding." — Sean Cummings tweet this

The restaurant reopened with a belated St. Patrick’s Day celebration, and Cummings said that the pub has been packed pretty much every night since opening.

He kept the pub’s memorabilia, including family photos of grandparents and cousins from Ireland, stored in his garage, ready to take out of storage. When Sophabella’s closed its storefront to focus on catering last fall, Cummings said he was the first person to get in touch with the owner about moving into the location.

The new space is more than double the size of the old location and allows for live music every night, which follows in accordance with two of his rules: the pub will always play Irish music over the sound system, and soccer is the only sport shown on the television — save an occasional University of Oklahoma or Oklahoma State University game.

“[Live music] goes from one person singing to four-person band, and we go from singalong, bang-on -the-table music to a classical vibe. Friday night is crazy, and Saturday is more relaxed. It’s fascinating to watch and scary if you’ve never seen it. On Mondays, [12-string guitar player] Jason Hunt plays and has a group of 30 people who watch him every week and sing along to every song.”

In the first weeks of reopening, Cummings said that customers have ordered a lot of menu classics like bangers and mash, shepherd’s pie and fish and chips, but the new pub features the introduction of a few vegetarian items like shepherd’s pie made with thick-cut shiitake mushrooms and a lunch menu with lighter options like a steak salad with champagne vinaigrette.

Lunch is served 11 a.m.-2 p.m., and dinner service is 5-10 p.m., with a limited late-night menu served until midnight Friday and Saturday.

Head chef Chris Bickel oversees the kitchen, which bakes its own Irish soda bread daily and brines its own corned beef for corned beef and cabbage ($10.99). It also sells Northern Irish dish boxty ($13.99): a potato pancake that is rolled flat and filled with beef, salmon or seasonal vegetables.

The Irish breakfast features rashers of ham, a traditional banger sausage, a tomato, two eggs and black and white pudding, which is a popular dish in Ireland. Cummings got the recipe from his cousin in Ireland.

“I have no idea why they call it black and white pudding, but I heard about it my entire life and my dad would try to do it, but no one in America made it, oddly enough. It is beef fat mixed with oats, barley and English spice blend that is in everything over there from dessert to savory dishes.”

The restaurant offers a pub outreach program that gives customers who are paying in cash the option to donate the portion of the check the restaurant would pay in credit card fees to Positive Tomorrows, a local elementary school for homeless children.

“I want people to have the option,” Cummings said. “We pay more in credit card fees than we do in rent.”

Since the opening, Cummings, 55, said he has had to come to terms with the fact that pulling 16- and 17-hour days isn’t as easy as it was in his 30s, but he’s happy to fulfill his dream of reopening the Irish pub to give the city’s sizeable Irish heritage population a place to connect to their roots.

“I haven’t done a busy opening like this in 10 years,” Cummings said. “It’s fun; I feel invigorated that it is working.”