For Tuesday’s event, the film club decided to keep the lead film a surprise and would only call it a “Wes Craven tribute film.” 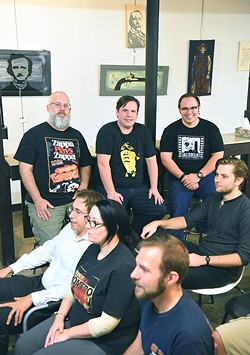 OKC Film Club’s Horror Fest might be the only place in town where you can openly, loudly and unabashedly yell at a movie screen, “Don’t go in there!”

The monthlong event wraps up Tuesday with a Wes Craven tribute and party hosted by OKC Film Club and Nerdy Girls OKC.

OKC Film Club wants people to know there’s more to Romero than the Night of the Living Dead series (which also was featured earlier this month).

Palmer founded the event two years ago as VHS Horror Fest and thought it would be fun to show lesser-known titles that were only playable on a VCR. However, he hadn’t anticipated the difficulty of finding the antiquated video tape players, and getting them to cooperate with modern projection equipment proved even more difficult.

Despite the trouble, Palmer knew he was on to something. Horror Fest 2013 brought in a fun-loving crowd. He decided to keep the festival but ditch the old-school tech.

Fans of the genre often return multiple nights and multiple years. Joel Hacker started watching horror films at a young age with his father, much to the chagrin of his mother. Hacker said he enjoys the opportunity to revisit his childhood, this time on the big screen.

“The first night, they screened Dead Alive,” he said. “A lot of people hadn’t seen it before … It got a great audience reaction.”

OKC Film Club co-founder Patrick Crain, who Palmer refers to as “the human film encyclopedia,” also fell in love with the genre as a kid. Growing up with asthma, he spent a lot of time in the house, and movies were his primary form of entertainment. He saw John Carpenter’s The Thing when he was 8 and Halloween and Friday the 13th not long after that.

“As an art form, [the genre is] important because horror basically reflects the psychological mood of our society. They always have, even from the early days in the 1930s, when the Universal monsters came around,” he said. “As an art form, [it] reflects our society’s inner fears and our anxieties — more so, I think, than any other genre.”

For Tuesday’s event, the film club decided to keep the lead film a surprise and would only call it a “Wes Craven tribute film.”

“We like to keep one of the movies a surprise. It’s fun for the audience,” Palmer said. “Even though I have an idea about what’s showing, it’s fun to walk into a theater not knowing what’s going to be on that screen.”

“This is a community where you show up, you watch a double feature, like in the old days, when you’d have The Wolf Man and then Frankenstein Meets the Wolf Man,” King said. “It’s something I always wanted to be a part of, but I’ve never seen that in the city.”

Print headline: District scream, OKC Horror Fest wraps up another year with a surprise film showing and party on Tuesday.