Warhol and the West, on display at National Cowboy & Western Heritage Museum, offers a ‘broader interpretation’ of Western art. 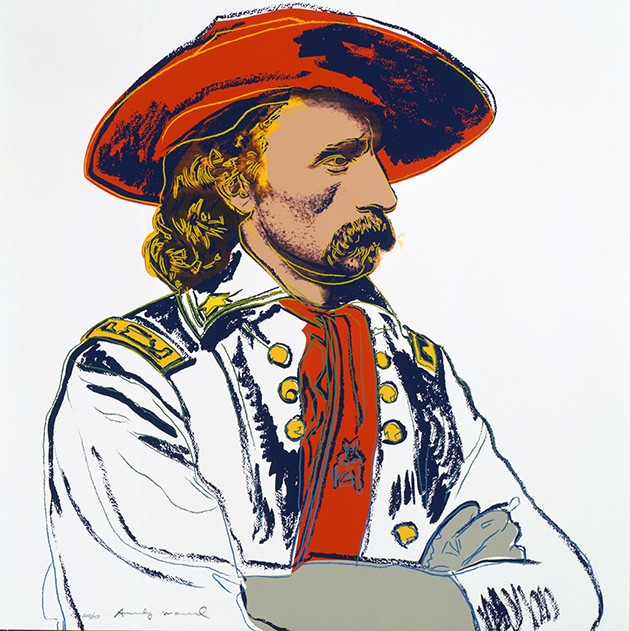 Warhol and the West

Featuring Andy Warhol’s prints of John Wayne, Annie Oakley, Geronimo and more as well as artifacts from the artist’s personal collection, Warhol and the West is on display Jan. 31-May 10 at National Cowboy & Western Heritage Museum, 1700 NE 63rd St. Perhaps no one is more surprised about that than the exhibition’s curator.

“Of all places, we got the National Cowboy & Western Heritage Museum in Oklahoma City,” Seth Hopkins, executive director of Georgia’s Booth Western Art Museum, where the exhibition originated, said in an interview for The Clark Hulings Fund for Visual Artists’ website. “I’ve been joking that I hope they have their lightning insurance paid up because it might strike when they start installing the exhibition. … There are probably some people spinning in their graves.”

Influential and controversial, Warhol’s paintings of Coke bottles and Campbell’s soup cans, screen prints of Marilyn Monroe, films of the Empire State Building and a man sleeping and his promotion of the avant-garde rock band The Velvet Underground so perfectly illustrate media theorist Marshall McLuhan’s dictum, “Art is anything you can get away with,” that people commonly attribute the quote to Warhol, but the New York City artist’s work is not typically discussed within the accepted canon of Western art.

Michael Grauer, curator of cowboy collections and western art at National Cowboy & Western Museum, said Warhol and the West is significant because its existence is so surprising.

“You say ‘Andy Warhol and art of the American West,’ and everybody looks ,
at you completely bewildered.”
—Michael Grauer tweet this

“What’s so groundbreaking about this exhibition is no one, for the most part, really considers Andy Warhol as part of the Western art lexicon,” Grauer said. “I mean, you say, ‘Andy Warhol and art of the American West,’ and everybody looks at you completely bewildered. … Ultimately, it’s a healthy thing because unfortunately historians get locked into seeing things a certain way. There’s a certain myopia that takes over, and Western art has a broader definition because of this exhibition, frankly.”

Alongside artworks and clips from Western-inspired films Horse and Lonesome Cowboys, items featured in the exhibition, including pairs of cowboy boots from Warhol’s large collection and a Howdy Doody doll and Roy Rogers alarm clock from Warhol’s childhood in 1930s Pittsburgh, show a lifelong interest in Western iconography.

“He was fascinated with the West as a kid,” Grauer said, “and then throughout his life.”

“The whole philosophy of pop art is literally consumption of popular culture and couching high art in a more popular or a more palatable way that more Americans could embrace,” he said. “At least that’s the way I see it as an art historian. And so he could celebrate the West by putting it in a form that most people could digest because art to the general public is sort of a voodoo thing, unapproachable ivory tower stuff. Andy Warhol, as a pop artist, thought that was a bunch of nonsense. It should be, I guess you could say, commodified in some way, but at the same time, I think it was to make it more approachable.”

Like soup cans on grocery store shelves, the images of the West are commonplace in American culture.

“That’s the reason he did the Campbell’s soup can, because everybody ate Campbell’s soup,” Grauer said. “That’s something they could understand, that art could be found in something as simple as a Campbell’s soup can. … A portrait of Geronimo or a portrait of John Wayne were things that people were somewhat familiar with, and then to see those images in a work of art in a museum or in a gallery made them in many ways more approachable. It’s the attempt to break down the barriers.”

Flattened and stylized in screen print form, these famous faces are more representative of the icons, archetypes and products they’ve become than real human beings.

“My real name, Marion Michael Morrison, didn’t sound American enough for them,” he said. “So they came up with John Wayne. I didn’t have any say in it, but I think it’s a great name. It’s short and strong and to the point. It took me a long time to get used to it, though. I still don’t recognize it when somebody calls me John.”

As represented in Warhol’s print, Apache resistance leader Geronimo, who spent the last years of his life imprisoned in Fort Sill before his death in 1909, allowed to leave only to be displayed at fairs and Wild West shows, becomes “a symbol for Native defiance in the West, the last major leader to surrender,” Grauer said.

“In the image he chooses to depict of Geronimo, he’s at his fiercest,” Grauer said. “Ironically, that photograph which is the basis for the Andy Warhol piece was a posed, studio photograph, so there’s artificiality throughout the whole thing. Geronimo as a person sort of ceases to exist, much like Duke Morrison as a person ceases to exist in the popular mindset.”

“I sold my photographs for twenty-five cents and was allowed to keep ten cents of this for myself,” Geronimo said. “I also wrote my name for ten, fifteen, or twenty-five cents, as the case might be, and kept all of that money. I often made as much as two dollars a day, and when I returned, I had plenty of money — more than I had ever owned before.”

While Warhol’s work depicts Western icons in their legendary forms, it can also be seen as a commentary on their commodification and offer subtle hints at the ugly truths they sometimes mask, Hopkins told The Atlanta Journal-Constitution.

“What he was saying is there’s the mystique of the West from the movies that gives us this glorified idea,” Hopkins said in a 2019 interview. “But at the same time, he was trying to tweak us into thinking about what we have done to the country, particularly to the Native American population.”

Though Warhol offered an unconventional take on the subject, Grauer said Warhol and the West fulfills National Cowboy & Western Heritage Museum’s founder Chester A. Reynolds’ stated mission “to guard, cherish and advance the heritage and romance of the West.”

“That’s exactly what Andy Warhol did with Cowboys and Indians,” Grauer said. “It allows for a broader interpretation. … This is firmly in the discussion of what constitutes art of the American West. You can’t escape it.”