Breakfast is the most important meal of the day, but I also think it’s the most indulgent. 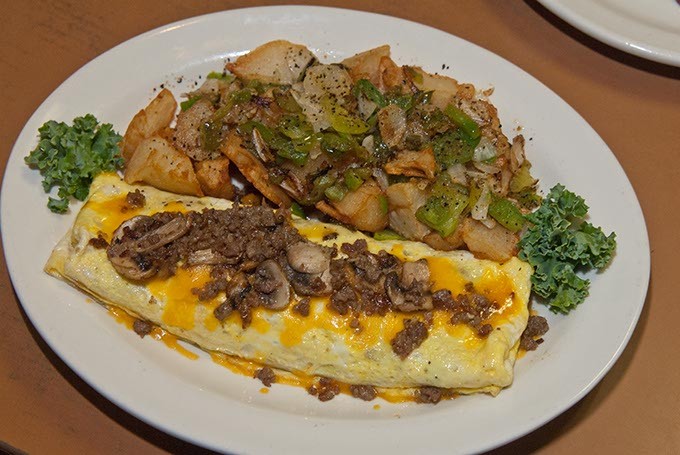 Breakfast is the most important meal of the day, but I also think it’s the most indulgent.

Do you need some food to jump-start your brain and body for the day ahead? Absolutely. But what does your day ahead really look like? If you’re like me, you probably spend more time sitting in front of a computer than you do on your feet. The heaviest thing I have to lift most days is my butt off a chair. The farthest I have to walk is from the car to the office and back. How many calories does that really require?

But there are folks who need a stick-to-your-ribs breakfast. The kind of people who are going to burn off the kind of calories you get from a big plate of biscuits and gravy, fried eggs and hash browns in their daily jobs are exactly the ones who need to know about breakfast at Cattlemen’s Steakhouse, 1309 S. Agnew Ave.

“Cattlemen’s Steakhouse,” you say to your friend who is not reading the paper. “Isn’t that a place for steak?”

Yeah, that’s why the owners call it a steakhouse. It’s in Stockyards City, where you can find many western-wear stores and also cows. Have you ever eaten at a steakhouse? It doesn’t just serve steaks.

“OK. No need to get hostile,” you say as your friend silently sets up an intervention for you.

Well, I’m sorry that I flew off the handle. Cattlemen’s is a different kind of steakhouse. It’s informal, so it doesn’t really shock me to find that it makes a mean sausage gravy and knows its way around an omelet.

That said, if you’re at Cattlemen’s right now, you are probably considering steak and eggs for breakfast. You can go crazy and get a porterhouse or any of its other big steaks, or you can get a smaller breakfast steak with eggs for just $9.50.

Unlike many diners, Cattlemen’s knows how to treat a steak right, so you’re going to get a cooked-to-order piece of meat that is tender and flavorful. It’s a hell of a deal.

There are also some standards you ought to try. The pancakes and bacon ($5.50) are perfect. Two nice, big flapjacks come to your table golden brown and piping hot. Take some butter and watch it melt and soak in, and then go over the whole mess with warm syrup. You won’t be sorry. And the bacon — thank Snouty, Pagan God of Pigs — is done just the way I like it: crisp, but still with a nice, meaty chew.

“How do brains taste, Greg?”

They don’t. They’re scrambled in with the eggs and impart a slightly watery texture but no discernable flavor.

If you get this, I assume it’s just because you want to tell people you ate brains. Add salt and pepper to make it better, Tabasco if that’s your thing. On the side, you get hash browns or home fries (get the hash browns) and a choice of toast or biscuit and gravy (get the biscuit and gravy).

For something a little more portable, the toaster sandwiches are a good choice. The egg, ham and cheese ($5.25) slaps scrambled eggs, some real seared ham and cheese between two pieces of toast. It’s simple but satisfying.

I was probably most impressed with the sausage and mushroom omelet ($6.75). I mean, aside from a great little steak, I thought this was the standout dish of the menu. This is a true diner omelet, not the French kind, so get ready for an egg pancake folded over some toppings. In this case, the mushrooms are sautéed, giving them a meaty flavor and texture. The sausage is crumbled and cooked, draining away most of the grease and leaving you with a very tasty breakfast treat. You also get your choice of potatoes and bread, of course, though you know where my heart lies.

If you’re in the mood for more food, and I know you probably are, there’s a breakfast buffet 8-11 a.m. Saturday and Sunday. It’s your standard fare: scrambled eggs, meats galore, fruit and cinnamon rolls.

I saw a man take down at least a half dozen buffet cinnamon rolls when I ate there. These are not small cinnamon rolls. R.I.P. Cinnamon Roll Guy, because you are absolutely dead by now.

You’re right, but there’s no time to discuss that now. Your friends are here to take you to mental health facility. Ask them to stop by Cattlemen’s on the way, though.

Everybody deserves a good breakfast.

Print Headline: Egg face Everyone knows about the lamb fries at Cattlemen’s Steakhouse, but what you really need is a stick-to-your-ribs Cattlemen’s breakfast. Now.