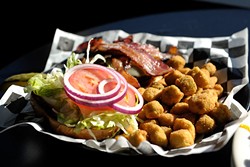 I have a confession to make: I love a good bar.

And I really love a good cheeseburger.

This isn’t so much a confession as it is an admission. I’m not coming out of some closet of culinary snobbery.

As much as I adore the fancy things chefs can do with food, be it reinvention or ingredient improvement, the bottom line is this: A good line cook can work magic behind a flat-top grill. And the test of that magic is generally an old-fashioned cheeseburger.

Maybe it’s in my blood. My grandmother owned a short-order diner called The Sugar Shack, and both of my parents worked there. Being a short-order cook is one of the most difficult, painstaking, grueling jobs out there.

There is a lingo that accompanies diner culture; I still remember my mother telling me about “two doggies walking and crying” — short order speak for two hot dogs with onions to-go.

I am an also an unabashed meat eater. There is something in me that delights that everything on a short-order flattop grill tastes so delicious because the grill has been seasoned with years of cooking. Sadly, this is not the art it once was. However, there are still plenty of similar eateries in town in the form of taverns and diners. 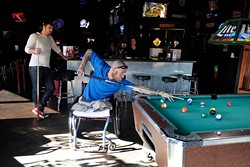 Lumpy’s Sports Grill, 12325 N. May Ave., is tucked in a strip mall, and behind its double doors are groupings of four-seat table tops and three-seat cocktail tables that frame two pool tables.

The menu is simple and primarily filled with straightforward bar food fried or cooked on a griddle. There are steaks and sandwiches, and if you can fry it, Lumpy’s probably has it: jalapeños, potatoes, chicken wings, cheese — you get the idea.

My arteries saw them coming a mile away, but I calmed their protests with the promise of salads at least twice in the coming week. The bacon cheese fries, served with ranch dressing (of course), were excellent — the fries were crisp and stood up to the half-pound or more of cheese on top. And the fries come sprinkled with crisp bacon because everything is better with bacon.

The cheeseburger, although flavorful, was a bit dry. It would have been better if cooked medium or even medium-well, as this one was done with a capital D. The bun, however, was perfect, toasted with butter to a golden brown. And the okra, well, I am hard-pressed to compare fried okra to my mom’s, but it was close.

The restaurant itself is dimly lit and brings to mind the memory of years of smoke, greasy food and spilled beer. I was immediately charmed. I was even more charmed by its selection of cocktails, beers and hard cider.

The music was a bit loud, but the service was remarkably prompt, especially considering the ambience. This is a noisy, laid-back kind of place where (almost) anything goes. I was there on a Saturday night, and although there was a crowd, it wasn’t knees-to-elbows — a nice change for anyone who has ever waited in line for the bathroom or ended up wearing a drink at a crowded bar.

Lumpy’s is not for everyone. It doesn’t pretend to be anything it isn’t. It is a basic bar with more than two beers offerings and a place where you can eat a damn fine burger.

What works: The fried okra. The bacon cheese fries are a wonderful meal by themselves. What needs work: The burgers could be a little less dry, perhaps cooked medium well. Tip: It’s loud, so if you’re having a talk with your significant other, go on a weeknight or sit far from the jukebox.

Print Headline: Classic cow, What you see is what you get — with a smile — at Lumpy’s Sports Grill on May Avenue.

What works: The fried okra. The bacon cheese fries are a wonderful meal by themselves. What needs work: The burgers could be a little less dry, perhaps cooked medium well. Tip: It’s loud, so if you’re having a talk with your significant other, go on a weeknight or sit far from the jukebox.