A dusty field off the Oklahoma River will soon be one of the world’s premier whitewater rafting facilities. 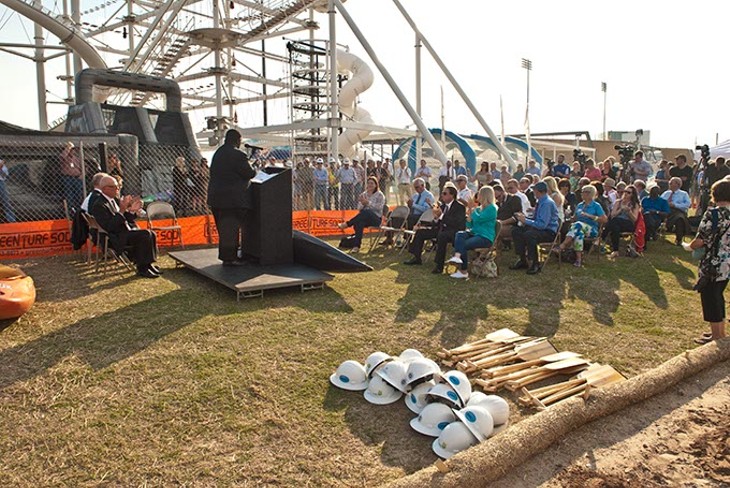 A dusty field off the Oklahoma River will soon be one of the world’s premier whitewater rafting facilities.

It might be hard to imagine but isn’t hard to believe, especially when the city has transformed what was little more than a sewage pool several years ago into a sparkling water course for kayaks, canoes and other water sports.

City leaders broke ground on the whitewater facility, which will officially be called Riversport Rapids, last week. Unlike other Metropolitan Area Projects (MAPS) that helped the city build on assets it already had, the Boathouse District and the whitewater course create something new for locals.

“I grew up in a city where we had this big ditch and the grownups called it a river,” Mayor Mick Cornett said, referring to the Oklahoma River. “We are indebted to the generation ahead of me to have the vision to see what could happen here.”

The growth means OKC is now a hub for American rafting, kayaking and canoeing. The city is home to more than state-of-the-art facilities used by world- class athletes; it’s also home to a growing amateur rowing community.

“I don’t know of any other city in the country that has this many rowing leagues where you have law firms and banks and various companies that come down and row against each other,” said Rick Adams, chief of Paralympic sport and national governing body organizational development for the United States Olympic Committee. “This is a model for what we love to see replicated across the country.”

The city moved quickly to begin whitewater center construction in an effort to win a bid for 2016 Olympic rowing trials, an event that has been held in New Jersey for several years.

“I would say [Oklahoma City] has emerged well beyond the radar,” Adams said. “It’s an important partner. It’s a city that has really shown an incredible interest and resolve in terms of supporting Olympic sport, and that is a big deal.”

Although a trials location is still being considered, Olympic officials cite OKC as a frontrunner.

When completed in 2016, the $45 million facility will be open to professional athletes and the public. Course bridges and pathways also will be open to the public, along with a restaurant that overlooks the rapids.

Riversport Rapids will complement the established Boathouse District, which is home to rowing training facilities, a fitness center and SandRidge Skytrail, a facility that features a zip line across the river.

Rowing officials realize that the Boathouse District and Riversport Rapids is a destination for professional athletes and also hope both will help establish more local athletes.

“When you have young kids that grow up in a community that live a 15-minute drive from this kind of water, this kind of coaching, this kind of equipment, it almost becomes an unfair advantage to being born someplace else in the country,” said Jacobi, a 1992 gold medal winner in slalom doubles canoe.

The University of Oklahoma, Oklahoma City University and the University of Central Oklahoma each have rowing teams and train there. There are also youth camps and programs training a new generation of rowers, thanks to the benefits of the transformed Oklahoma River. 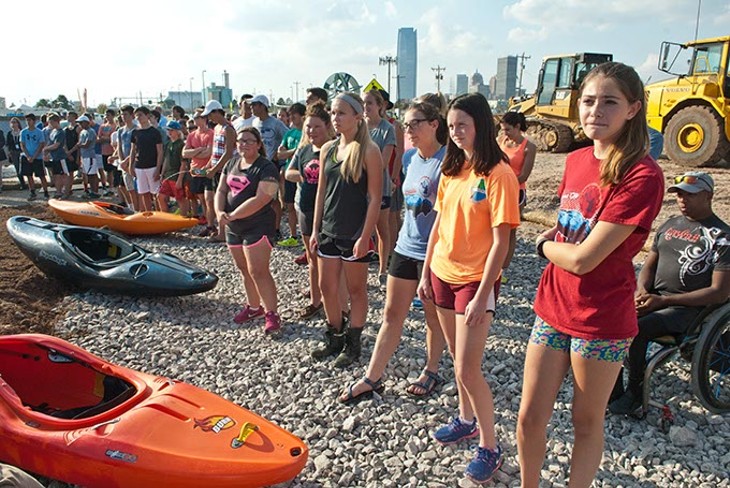 While many envision the day when professional whitewater rafters train at the new course, Mike Knopp, director of the Oklahoma City Boathouse Foundation, visualizes a different picture.

“Imagine yourself less than two years from now in Bricktown,” Knopp said. “You have some dinner and you decide to go whitewater rafting. In what other American city can you do that?”

Knopp said the public course will offer a 90-minute traning session with instructor-supervised time on the rapids.

“This is for everybody in the community,” Knopp said. “We are going to have all sorts of different ways to get wet, get on the water and have fun.”

In recent years, OKC has completed large-scale projects that transformed parts of the city. Bricktown converted obsolete warehouses into an entertainment district, and streetscape projects downtown created bike lanes and sidewalks. While those projects allowed locals to enjoy features found in other cities nationwide, the whitewater center and Boathouse District are unique both nationally and worldwide.

“We are the only city in America doing this,” Knopp said. “This is a differentiator for Oklahoma City.”