When she taught in Edmond Public Schools, Phebe Kallstrom spent most of her time imparting discipline to her middle school pupils.

So, when Kallstrom retired after 31 years, structure was the last thing on her mind.

“When I retired, I finally had time for myself,” said Kallstrom, who is featured through mid-November with bead artist Whitney Ingram at Studio Gallery, 2646 W. Britton Road. “And I really wasn’t a painter, but I wanted to be.”

After years of specializing in dry mediums such as charcoal and colored pencils, Kallstrom began lessons with artist Dennis Johnson, the in-house art instructor at co-op Studio Gallery.

Moving from watercolor to acrylic and finally to oils, Kallstrom now makes bright, whimsical art built around seascapes, beachscapes and the life aquatic, including sea life and seafood.

She said she sees the irony in being landlocked yet focused on the coast, but it has a lot to do with finding her muse.

“There was a lot of structure in teaching middle school kids, and this has freed me up,” she said. “And it’s been wonderful.” 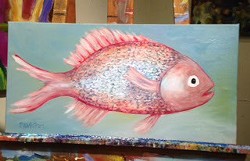 Kallstrom and Ingram are two of 18 artists who work out of Studio Gallery and take turns displaying their art in the small gallery space.

Ingram began making beaded jewelry five years ago when she was living in Chicago.

“It was kind of an accident — a great accident,” Ingram said. “Around the corner from where I lived, there was a great bead shop. It took me about a year of passing by the shop to finally go in. I saw all these beautiful colors and I had these ideas in my head, but I didn’t know how to make jewelry.”

Initially, she gave her creations as gifts, but by early 2015, she was staging her first shows and selling her work.

“Everything I was selling was word-of-mouth, or I’d sell it off my neck — somebody might say, ‘I really like that,’ and I’d say, ‘Really? It’s for sale,’” Ingram said.

She joined Studio Gallery in 2015 and now regularly makes trips to The Tucson Bead Show in Arizona, which happens every January and early February and features hundreds of bead sellers.

But Ingram said she stays out of the mass market, preferring to create original pieces.

If she were to mass-produce her necklaces and bracelets, she said, she would get bored after the first 10 replicas.

“Everything that I make is one of a kind,” she said. “Now, David Yurman has started making beaded jewelry. When [luxury jewelry designer] David Yurman decides he wants to make a lapis necklace, he’ll go to China and has them make lapis beads for what he wants to do. So he can buy at a completely different price point than I can.”

When they’re not creating, Kallstrom, Ingram and other gallery artists take turns manning the space.

“The artists who are represented here, we all share the bills, we share the rent and we share the desk,” Kallstrom said. “The back is available for any of us to use as our studio.”

Free of the stress of retail jewelry making, Ingram’s Studio Gallery affiliation allows her to have fun creating while not getting bogged down in assembly line work.

“I don’t have the buying power to make it as inexpensive to make,” she said. “So, if I can do it through the Studio Gallery, I can still make it so the cost and my time balances out.”