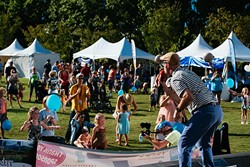 After five years of existence, Wiggle Out Loud is now technically old enough to join a large portion of its most enthusiastic guests in kindergarten.

Wiser said he could not be a prouder father to Wiggle Out Loud, which is now organized by The Children’s Hospital Volunteers nonprofit group.

“I’m glad that ‘he’ made it this far,” Wiser said, “because if it was us [organizing the festival], we would not have made it past the second year. It’s just too big.”

Wiser was more than happy to pass the official organizer baton over to The Children’s Hospital Volunteers in 2015. The festival was a true passion for him, but the project was too large in scale for him to pull off alone with the help of just a small group of volunteers. Instead of running around frantically the day of the fest, he can now enjoy the event at his own relative leisure.

“A friend of ours said the irony of it is that I was so busy trying to organize a family event that I wasn’t spending time with my own family,” he said. “But now my kids and my wife come and I’m like, ‘Let’s go do some squirt gun art or go play on the obstacle course.’”

The headlining musical performer at this year’s event is singer-songwriter Sarah Lee Guthrie, granddaughter of Woody and daughter of Arlo.

Guthrie performs for more than just children’s audiences, although she is often booked for family shows, including several performances with OKC’s Metropolitan Library System.

Wiser said Wiggle Out Loud often looks for a featured performer who has a following outside of children’s music. The Verve Pipe, a Michigan-based post-grunge band most known for the 1997 Billboard hit “The Freshman,” headlined the festival’s first musical lineup.

“Our goal when we were getting a headliner for the festival was to look at acts that have a show for families and kids but also have a name outside of that world to draw in more than just kids and families,” Wiser said.

“I like to call him a Steve Martin for kids,” Wiser said. “He does the banjo and it’s just off the top of his head. He’s hilarious, and kids love him. He’s a cartoon character in and of himself.”

Wiggle Out Loud has a lot more than music to offer. The festival is bringing in more food trucks this year, and Hideaway Pizza is sponsoring a misting tent.

Children can create squirt gun art, play a giant game of Connect Four and run through a fun obstacle course. Microsoft is partnering with the fest this year and will let children create original works of art on a tablet using its Fresh Paint program. The art can then be directly posted onto their parents’ Facebook page.

The stage backdrop is a giant video screen that will allow children and families to keep engaged with what’s going on no matter where they are on the Great Lawn.

Wiser said he is always struck by the visual appeal of Wiggle Out Loud.

“You look around, and it’s just like, ‘This looks awesome,’” he said.

Wiser said he has seen photos of other festivals that resemble tents set up around a large campsite. In contrast, he said, everything at Wiggle Out Loud looks vibrant and exciting.

“It just looks awesome,” Wiser said. “People see pictures and are like, ‘I want to be there.’”

When organizing the first Wiggle Out Loud, Wiser was so frantically busy making sure the whole thing went off without a hitch that any good attendance numbers just seemed like icing on the cake.

Sara Jacobson, Hospital Volunteers executive director, said the hospital had been sponsoring some 5K community events for several years, but those were lightly attended and eventually fizzled out. The Hospital Volunteers was also looking into organizing a family-friendly art and musical festival of its own — something a lot like what Wiggle Out Loud already was.

Given the great stress the festival was piling on Wiser’s plate and the healthy-lifestyles theme Wiggle Out Loud had been promoting from the beginning, a partnership between Sugar Free Allstars and the Hospital Volunteers could not have been more perfect.

Jacobson said the nonprofit’s goal is to help children in the hospital forget where they are — at least momentarily — and prevent children outside the hospital from needing treatment through promoting healthy living.

“What we’re doing are art and music programs,” Jacobson said. “Really, anything normal and fun that is happening outside of the hospital we want to bring to them.”

Since Hospital Volunteers has taken on the lion’s share of organizational work, Wiser said the growth he has seen in Wiggle Out Loud has been fantastic.

“There’s more activity on our social media now than I’ve ever seen in five years,” he said, “which is amazing.”

Jacobson was at a birthday party for a friend of her young child when another mother came up to her and asked if she had heard of this great event called Wiggle Out Loud, not knowing she was talking to its chief organizer.

“Yeah, I think I might be there,” Jacobson said with a smile.

Both Jacobson and Wiser are excited that Wiggle Out Loud’s branding has become something many families are starting to recognize. That recognition will likely grow in the future. Jacobson said there are preliminary plans in development to take the Wiggle Out Loud concept directly to local schools.

Wiser said he is excited to see how Wiggle Out Loud will grow in the future. He likes seeing family members out creating bonds with one another while also forming bonds with other families in the community.