COOP Ale Works taps into the growing hard seltzer market with the first local brand to distribution, Will & Wiley. 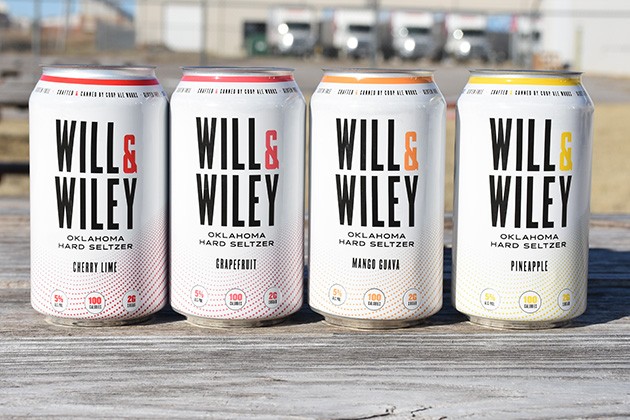 The largest-ever product launch for Oklahoma City’s largest brewery is not an IPA or lager. Building off trends in the market that have catapulted alcoholic seltzers into huge sales growth, COOP Ale Work’s Will & Wiley is the first local hard seltzer distributed to retail and restaurant locations.

Led by market share leaders like White Claw, which is owned by the company that makes Mike’s Hard Lemonade, and Boston Beer Company-owned Truly, hard seltzers sales exploded in 2019. White Claw and Truly combine to represent about 85 percent of the market, according to Vox, and its total sales experienced a 200 percent increase from 2018, according to Nielsen.

An analysis by investment banking company UBS predicts the hard seltzer market is only beginning to explode. It predicts the market can boom as much as $2.5 billion by 2021.

COOP management watched the summer of 2019 become dominated by social media hashtags like #AintNo LawsWhenYoureDrinkingClaws and kept that in mind when work began in earnest to develop their own brand of hard seltzer.

The name Will & Wiley is designed to be memorable because of alliteration and promote easy shares on social media.

“It’s easy, fun to say and rolls off the tongue,” said Maggie Sylke, COOP’s brand marketing specialist. “We went through all of these naming brainstorming sessions where we would have all of these other ones, and this was one of the last ones we came up with.”

She said the brand name easily builds into potential hashtags like “Where there’s a Will, there is a way” or “getting Wiley with it.”

Will & Wiley hit retail and restaurant locations in the Oklahoma City metro March 1 with four-flavor 12-packs or individual flavor six-packs. Initial launch flavors include cherry lime, mango guava, pineapple and grapefruit. Restaurants also have the option of having a tap with unflavored hard seltzer that can be mixed with their own syrups and flavorings. Two additional flavors will hit shelves in June.

Sylke said COOP’s brewers kept its focus group of flavor tasting in-house and invited a few friends and family to sample their own products as well as both major and regional competitors’.

“The overwhelming takeaway was that [other brand’s] syrupy or artificial-tasting fruit flavors were not well liked,” she said. “They were aiming for natural flavor and authentic, not too strong but not too sweet. Grapefruit was an obvious choice from what we’ve seen in the market.”

Unlike beer, which is made by fermenting grain, hard seltzers have gained a strong foothold by offering an alcoholic drink made without gluten. For a long time, customers with a gluten intolerance were largely relegated to drinking ciders, which have a high sugar content.

Will & Wiley is made by fermenting simple sugars with water compared to complex sugars when making beer, Sylke said. Every flavor of Will & Wiley’s 19.2-ounce cans are 100 calories, 5 percent alcohol by volume (ABV) and have 2 grams of sugar.

“We do make products that are not gluten-free, so there is some caveat to that, but the product is gluten-free, low-calorie and provides something to people trying to stay a little more healthier,” she said.

Will & Wiley is available at retailers like OnCue, Homeland, Crest and many others year-round. Sylke said that hard seltzer sales continued strong nationally, even during colder months, and that COOP is aiming to slice a 3 to 5 percent market share compared to larger brands.

“I think our main focal point is that it’s local, especially in Oklahoma where it’s different and we can reel in people that care about supporting local businesses but aren’t beer drinkers,” she said.

COOP hosted a cocktail contest prior to product launch in which The Jones Assembly won for cocktail creation made using Will & Wiley, while Gun Izakaya won for a drink made with the unflavored hard seltzer and syrups of its choosing. At press time, Scott Marsh, Jones Assembly director of operations, said they are still determining its spring cocktail menu, which will likely feature a drink made with COOP’s hard seltzer. Other bars like Ponyboy, 423 NW 23rd St., said they will offer standard Will & Wiley flavors instead of adding things to the unflavored seltzer.

“The flavor combinations they put together at the plant are so strong already,” Alex Larrea, Tower Theatre and Ponyboy beverage director, said.

“We’re excited to be the first local distributed,” Sylke said. “There’re some others in local taprooms. We’re excited to expand our audience and bring in a new group of people that might not be familiar with COOP because they’re not big beer drinkers.”

She said COOP will unveil its summer seasonal Fly Me Away, a New England Style IPA, this May.  Its Id No. 2, a peach Berliner Weisse, will be released in April or May.