When many local cinephiles heard word that the legendary Winchester Drive In Theatre was hit hard by last year’s epic spate of tornadic activity, an aura of sadness spread throughout the community. 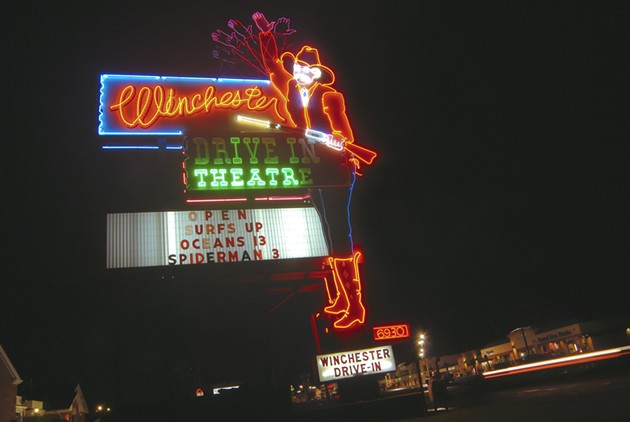 When many local cinephiles heard word that the legendary Winchester Drive In Theatre was hit hard by last year’s epic spate of tornadic activity, an aura of sadness spread throughout the community. After all, the drive-in was a celebratory gathering place for movie fans looking for nostalgia and families looking for inexpensive entertainment, as well as an integral part of the Oklahoma City landscape, a piece of the past that, sadly, is pretty much dead in America.

“I have been out here since 1968,” Winchester owner Lindy Shanbour said. “This place is my home. I love going out here, I love people coming out here and I love watching the kids grow up. There’s a lot of feelings in the Winchester, a lot of memories. I could have sold it after the tornado, but that wasn’t the way I wanted to go.”

Instead of closing the curtain on the business, Shanbour decided to rebuild, which included repairing the destroyed screen, installing new projectors and fixing a large amount of holes in the roofs. Film fans can see his dream realized once again when the Winchester opens its doors Friday, just in time for the upcoming summer movie season.

Besides the unpredictable weather, Shanbour added that some of the other killers of drive-ins include daylight savings time, the cost of keeping up with technology and the winter season. But if the response on social media (and real life, of course) is any indication, it’s a cost that Shanbour is willing bear for many more years.

“Have you seen our Facebook? Over 14,000 comments! People are excited about the new season,” Shanbour said. “But I also get letters and phone calls from people all the time telling me thank you for keeping this drive-in open. I have also seen a lot of kids grow up, and they always remember and they bring their kids. It’s why I can’t think of doing anything else.”

While, at press time, a list of the first pair of features wasn’t available for the one-screen drive-in, Shanbour promises a summer full of blockbusters with an emphasis on family films, which have always been a hot ticket for the Winchester. He cited films from Disney and recent hits like Madagascar as being the “best for business.”

Though film culture has changed since the grand opening of the Winchester — its first lineup included the decidedly adult World War II comedy The Secret War of Harry Frigg starring Paul Newman as part of a triple bill — Shanbour reiterates that his love of movies and the Winchester itself will be a part of him for the rest of his life. As long as he’s around, it will stay open, tornadoes be damned.

“I could go on and on and talk about the Winchester for hours,” Shanbour said. “I love talking to anyone about it, even the people who come from out of town to take pictures of the cowboy and the concessions. Half the people who come through those gates out there thank me for keeping it open. It’s a part of Oklahoma, and that feels good.”