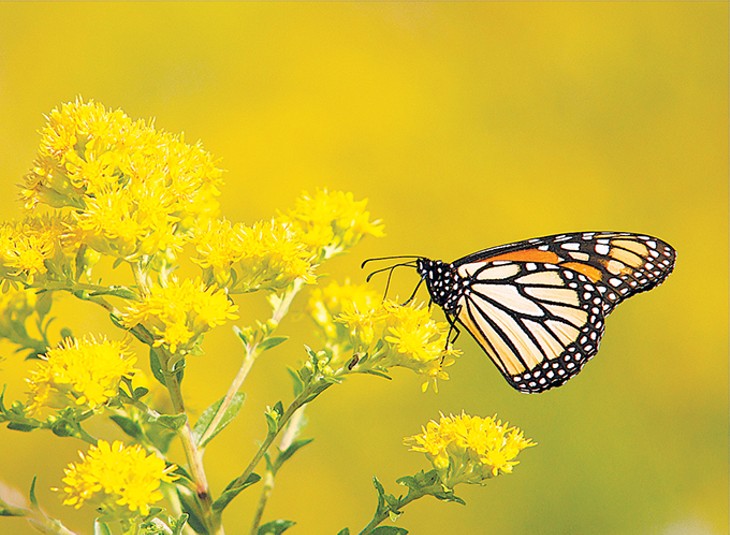 Conservation efforts to save the monarch butterfly from endangerment have become increasingly more common over the last few years. In Oklahoma, over 40 organizations have joined together in a true grassroots movement to create Oklahoma Monarch & Pollinator Collaborative, an awareness group working to preserve both the species and its ecosystem.

MonarchWatch, a research group that monitors the butterfly’s migration patterns, found a near 15 percent decrease in the amount of forest the monarchs occupy. This area is positively correlated with monarch prevalence, allowing researchers to reliably estimate fluctuations in population size.

Every spring, monarchs journey north from Mexico to escape the heat of the upcoming summer, making their way toward the northern parts of the United States and southern Canada. These regions act as the butterflies’ seasonal nesting grounds until they are ready to make the return trip south in the fall.

“Oklahoma is centrally located in their migratory pathway,” said Katie Hawk, director of communications and external affairs at The Nature Conservancy of Oklahoma. “They migrate each year twice.”

In November 2016, Hawk attended a summit hosted by Oklahoma City’s Myriad Botanical Gardens for those interested in sustaining monarch populations. It was there that they drafted a three-year statewide action plan to do just that. The plan was officially launched this April.

“It outlines all the different ways that we here in Oklahoma — every Oklahoman — can help and what our challenges are,” Hawk said.

Eventually, the interested parties came to be known collectively as Oklahoma Monarch & Pollinator Collaborative (OMPC). Since its formation, the cooperative has introduced Okies for Monarchs, an initiative intended to expand public outreach.

Although the group lists a number of ways they plan to address the issue, their most notable contributions come in the form of gardening and education.

“Really the education committee is where we’ve dived in and done a lot more concrete work,” said Lily Christman, youth and school programs coordinator at Myriad Botanical Gardens. “It’s something that’s really important to us. We try to really infuse it in any way we can.” 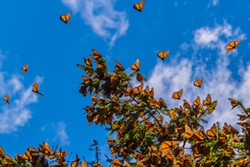 Myriad Botanical Gardens is a member of OMPC and is scheduled to host a showing of Flight of the Butterflies 7 p.m. Sept. 6, just one example of the kid-friendly events used to educate visitors of all ages. A teaching session is also expected to be held in August to help educators incorporate monarch ecology into their lesson plans.

“We do also really try to promote the idea of monarch waystations, so we have a prairie garden here as well as a pollinator garden in our children’s garden,” Christman said. “As an educator, monarchs are a really great way to draw kids into the idea of conservation and of pollinators. What kid doesn’t like a monarch butterfly?”

Mary Waller, director of OMPC, advised those developing a waystation to exercise caution when gathering the plants. Paying close attention to the source is key, as some have been treated with pesticides that make their way into the nectar. A diverse garden could also make for a better habitat.

“They need fuel when they fly through our state,” Waller said.

The milkweed plant in particular serves as a host for the monarchs, and its inclusion is critical when developing a waystation for the winged migrants.

“Without milkweed, they would not survive,” Hawk said. “Milkweed is what they require in order to reproduce.”

“It is a native plant … that can support so many other things,” she said. “I’ve had swallowtails come and nectar on my milkweed, a number of different species of bees and wasps … and yesterday, I looked out and [a hummingbird] was nectaring not on the feeders that I put out for it, but on the milkweed. If you plant it, they will come.”

Even one plant is a valued contribution, and the benefits are not limited to the environment alone.

“It’s actually an economic interest,” Waller said. “When we have a healthy pollinator system, we have a more productive and robust economy. It’s really about a healthy environment for everybody and a healthy economy for everybody.”

"Our goal out of all this is to prevent the monarchs from going extinct."—Katie Hawk tweet this

Their efforts appear to be highly regarded thus far.

“There’s not a day that doesn’t go by where someone isn’t calling and saying, ‘We want to help. What can we do?’” Hawk said.

Oklahoma Department of Transportation even went so far as to rework its roadside mowing schedule to not disturb the monarch’s migratory schedule. But that’s not the only change they’ve made. They recently designated the Interstate 35 corridor Monarch Highway due to the amount of migratory traffic the area receives annually.

Hawk said interstate collaborations seem to be abundant within the monarch preservation community, which have been spearheaded by National Wildlife Federation.

“We’re all focused on our own communities, but we do share information and then attend conferences together,” she said. “It’s an opportunity to connect anyone and everyone with nature.”

Hawk also mentioned a pending grant program with the U.S. Golf Association and, on the local level, a potential partnership with Oklahoma Association of Conservation Districts “to implement a pilot pollinator strip program for producers on farm and ranch land.”

In 2019, the U.S. Fish and Wildlife Service will decide whether to classify monarchs as an endangered species.

“I don’t have memories of monarchs fluttering all around my backyard growing up as a kid. My parents do. I’ve met so many other people that do, and when I hear them, I’m like, ‘Wow! Really? You grew up as a kid horseback riding when there were monarchs flying off the ground all around you? Unbelievable,’” Hawk said. “I would love for our future generations to be able to have that. I hope to see that someday while I’m still alive.”

Flight of the Butterflies