With dances and tears

Adriana Medina, an OKC-based mariachi violinist, explains the depth and meaning of the musical style. 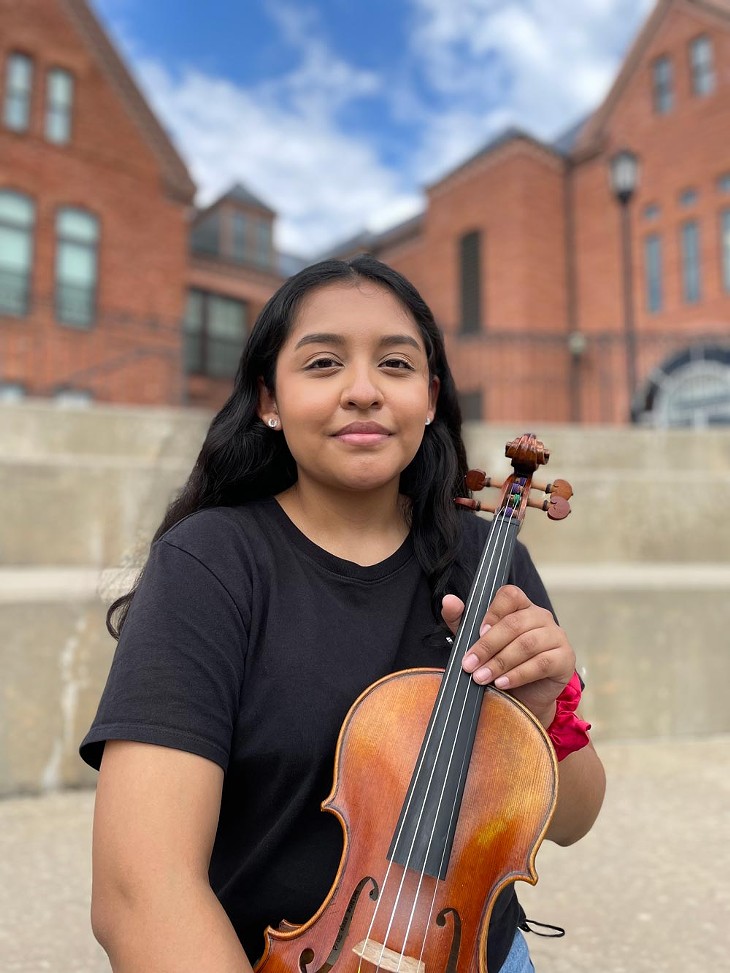 It’s the middle of Hispanic Heritage Month, which runs from Sept. 15 (Mexican Independence Day is the 16th, not Cinco de Mayo) to Oct. 15. Let’s celebrate by getting a glimpse of mariachi culture.

“Music is very important to us Mexicans. We will celebrate life with dances and tears. Mariachi music is part of every life event,” Adriana Medina said.

Medina is an OKC-based mariachi violinist and a music education student at the University of Central Oklahoma. An Oklahoma native, her mother is from Zacatecas, and her father is from Puebla.

She has embraced her Mexican- American background, and calls herself a “chicana.”

“I’ve taken that term [chicana] and turned it into something positive, something prideful. Many other people have done the same thing. To be chicana(o) was an insult from the immigrant generation as a way to embarrass us for our broken Spanish after entering school in the United States. I use it with pride,” she said.

Though her Spanish used to be a bit broken, she’s improved her fluency in recent years.

“Mariachi music is very dear to the hearts of Mexicans and our culture. It really celebrates all life events from birth to death. It is ingrained in our culture. It has involvement. As a band we always want you to sing with us, to dance along, and to do a grito (shout) ... It is not like classical music where you sit from a distance and watch quietly. It is the exact opposite. We want feedback and to know that people are having a good time,” Medina said.

“Many people want to be carried to their grave with music, and it is a very beautiful and intimate thing we do. Each time we play at [a funeral] I mourn with them and play as expressively as I can. We all do,” she said.

Medina remembers hearing an eclectic mix of American and Mexican music in her home as a child.

She took up the violin at age 11 at

Belle Isle Enterprise Middle School and has been building a career in music ever since.

“I had chosen violin in middle school, because I had always wanted to play it for mis abuelitos. I rationalized at that time that the violin was bilingual in the way it can cross two cultures with both American and Mexican music. It can do classical music and mariachi music. At that time, I wanted to play well enough to impress mi abuelita,” she said.

“It was the phone call where [mi mama] was contracting them [for mi abuelito’s funeral] that I happened to be practicing my violin. As she was finalizing the details for their appearance on the day of the funeral, Don Lupe heard me playing and promptly asked my mother if I would like to join,” she said.

Medina, 14 years old at the time, and her mother both agreed that it was too early for her to join the band, but in 2017, at the age of 16, she was ready. By that time, though, her abuelitos in OKC had passed away.

“I never got the chance to play mariachi music to mis abuelitos, but I think about them in my music,” she said.

Mariachi is a uniquely Mexican musical genre that contains indigenous and colonial influences. The traditional instrumentation of this ensemble includes guitarrón (acoustic bass guitar), vihuela (smaller version of a guitar, the “soul of mariachi”), guitar, violins, and trumpet. In addition, the band members sing and harmonize with each other.

Medina has gotten over a lot of the shyness of singing with the band.

“I sing harmonies with them. Certain songs require the entire ensemble to sing along, and I usually sing the third or the highest note because I have a higher voice range. For a while I was too shy to sing, but I have been feeling more confident and want to express myself with them. I harmonize for now, but eventually I will start singing my own songs,” she said.

With classical music, students are introduced in a classroom setting. The way many mariachi learn is from the streets,” she said.

Memorization is essential in learn- ing mariachi, as the music is not written down or read from sheet music. Medina’s band leader, Don Lupe, teaches the band new songs by playing them on his trumpet or violin line-for-line. Then the band echoes each line until they know it.

“He plays a part, I observe and recall it musically. We do that until we get through the whole song but not without repeating each section or theme. After two hours we should be able to play it as an ensemble. I find that I memorize best that way rather than having the music in front of me. Once we leave it’s our responsibility to practice recalling it. [The next time] we perform it as an entire ensemble will be...in front of a crowd,” she said.

In Medina’s classical training in the symphony orchestra, the musicians are expected to match each other’s playing style for a homogenous sound, but there is more freedom in personal style in mariachi.

“Mariachi is definitely more flexible with personal style. In the beginning when I joined, I would ask my boss how he wanted me to bow or play certain styles, and he would simply tell me ‘whatever is easiest’ and whatever I think best... If we play sad songs, the bowing is more expressive and long. If we play upbeat songs, there is more energy to it. As long as we’re in sync, it is all right.”

To “bow” or “bowing” refers to how the player engages the strings with the bow.

Medina has plans to continue honing her musical skills in mariachi and classical styles. She would also like to take a year after finishing her undergrad to travel across Mexico and observe the regional styles of mariachi.

As an educator, she’d like to create sheet music versions of mariachi music and share it with her students.

“I want to bring mariachi music to schools to help with confidence in performance and improvisation. I’d like to add something new to music education.”