Being a fan of a TV show, a movie or a comic book might seem like a largely solo pursuit, but given the right context, it can be the foundation for shared enthusiasm and community. One such place is Wizard World Comic Con (WWCC), which comes to Oklahoma City Oct. 27-29 at Cox Convention Center, 1 Myriad Gardens.

WWCC, a multi-city tour, first came to Tulsa in 2014 and returned for the next two years before moving to Oklahoma City.

“It’s our inaugural show in Oklahoma City,” said Jerry Milani, public relations manager for Wizard World. “We hope that fans who loved it in Tulsa will follow us down the highway and come out for this, as well.”

Part of the event’s appeal is its broad scope. WWCC offers a wide variety of celebrity photo opportunities, vendor booths and children’s activities such as face-painting and a kids’ costume contest. Celebrity guests at the event include Kate Beckinsale, Val Kilmer, Jewel Staite (Firefly), and several cast members from Buffy the Vampire Slayer, including Charisma Carpenter, Nicholas Brendon, James Marters and Emma Caulfield. Photo and autograph opportunities are available for purchase.

WWCC will feature 50-60 hours of panel programming with celebrities and on topics such as the entertainment industry or learning to draw. The event also includes a show stage with musicians, dancers and magicians, Milani said.

Some of the major fan communities frequently in attendance at WWCC are the Ghostbusters, Star Trek and Star Wars fandoms, but Milani said that fans of all different genres attend.

“We want Wizard World Comic Con to be a celebration for fans of everything pop culture,” Milani said. “That can mean whatever they like in pop culture.”

Attendees will also have the opportunity to meet writers and illustrators for shows such as American Gods, Ren & Stimpy and El Diablo. In addition, local comic book artist Brian Winkeler will be debuting three new titles: D.I.S.C.O.U.N.T. Force, Agent G and Decembo, The Powerful. Winkeler said the inspiration for D.I.S.C.O.U.N.T. Force came from a creative shopping excursion. 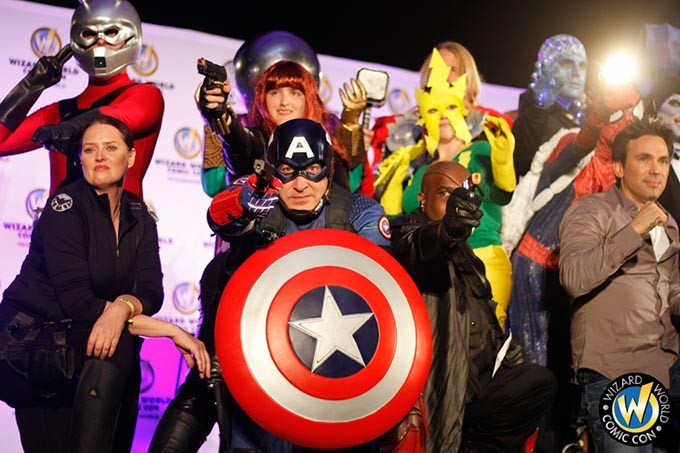 “I teamed up with local illustrator Sam Washburn and local designer Clint Walkingstick to do a 16-page comic starring shitty action figures we bought at Dollar Tree,” Winkeler told Oklahoma Gazette. “We’ll be selling the book as well as packages that include the book, an action figure and fun swag like stickers and pins.”

When not meeting the people in and behind their favorite shows and movies, WWCC attendees can always dress like them, as the event is known for its culture of cosplaying. Many cosplayers choose to make their own costumes — sometimes multiple outfits over the weekend.

“You never know, when the show starts, what people are going to dress up as,” Milani said.

On Saturday night, Milani said, fans become the stars. WWCC will host a costume contest where attendees can show off their creativity and even win prizes. Cosplayer Brit Bliss and creator and publisher Victor Dandridge will judge the competition.

“You see the pride people take in working for weeks and weeks on a costume,” Milani said. “We’re pretty psyched also that it’s leading right into Halloween. People are going to be in the spirit already.”

“Every different vendor, you’re going to find different things, and I think that’s part of the fun,” Milani said. “It’s that whole immersion of everything in the pop culture world, and a big part of it is what people can find.”

From meeting actors and illustrators to mingling with other cosplayers, WWCC creates a culture of community between fans who might suddenly find themselves surrounded by people with the same set of interests.

“Fans of anything… they’re all welcome to express that at Wizard World, and there’s going to be lots of other people doing the same thing, which is I think the greatest part of it,” Milani said.