Hear about trailblazing women journalists who made history from the women themselves at Friday’s roundtable discussion. 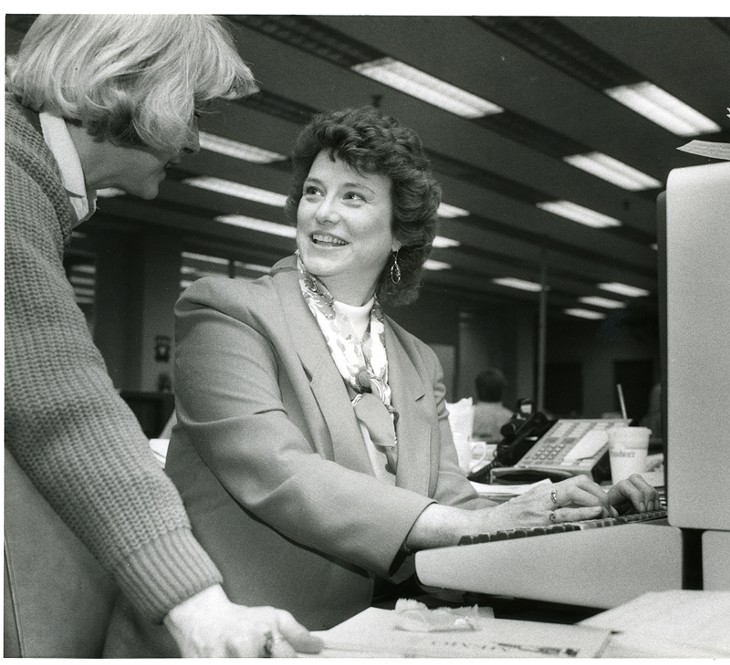 Hear about trailblazing women journalists who made history from the women themselves at Friday’s roundtable discussion.

The story of women journalists in Oklahoma can be summed up in a statement by Sue Hale, the first female managing editor of The Daily Oklahoman. “Oklahoma was progressive before there was a word for it,” she said. This might be a surprising take on our conservative state. But scratch the surface and you find that enterprising women were defying convention before Oklahoma obtained statehood. The Pioneer Woman Museum in Ponca City celebrates the pioneering spirit that settled Oklahoma. It highlights the role women played in carving out an existence in this landscape. It’s only natural that the museum should house a celebration of the women responsible for blazing a trail in the boy’s club that is journalism. The exhibit Breaking News: Oklahoma Women Journalists opened at the museum in July 2013. The exhibit’s unveiling featured a roundtable discussion by some of the women who had a hand in making that history. Bob Blackburn, executive director of the Oklahoma Historical Society (OHS), mediated the roundtable discussion. “I think I got in one or two questions,” he said. During the discussion, he said, “You could see this bond in this generation of women. I thought at the time, ‘This is worthy of a bigger audience.’” Blackburn’s mother is the iconic local celebrity Ida “B” Blackburn, a pioneer of early local television. She hosted television shows such as The Ida B Show and At Home with Ida B until 1975. She is part of the exhibit. “I saw the glass ceiling up close and personal and saw my mom broke through that and made a nice career out of it,” Blackburn said.

Lights, camera, journalism At the same time, filmmaker Bryan Beasley was working on the story of Edith Kinney Gaylord. The Quiet Philanthropist: The Edith Gaylord Story is a project of the OHS and will debut Friday at deadCENTER Film Festival. The premier is a fitting opportunity for another roundtable discussion between trailblazing female journalists. The participants include Sue Hale, Jenifer Reynolds, Vivian Vahlberg and Pam Olson, all of whom are featured in the exhibit. Hale started work with The Oklahoma City Times in 1975. She moved here from Topeka, Kansas, where she reported for the Capitol-Journal. She was, as was the standard in those days, assigned to the “women’s department” despite the fact that she came to the job with several years of experience not only reporting but running a newspaper: The Southwestern Kansas Midfield Courier. “Every newspaper in the 1960s had a women’s department, and I needed a job,” she said. “I finally convinced the editor to at least consider me when a beat came open with the police, and he said, ‘No, no. We can’t have a woman do that.’” When she moved to Oklahoma City and approached The Oklahoma City Times, she noticed something was different: there were women department heads, and they weren’t running the women’s section. “I interviewed with Joan Gilmore. She looked at my things and said I didn’t belong in the women’s department ... about a week later, I went to work for Kay Dyer, the metro editor of the Times,” she said. “We [women journalists] were darn lucky to be in Oklahoma, here it was never ‘We’ve never had a woman do that.’” Why the difference? Well, for that, we have to look a little further back into the history of Oklahoma’s Gaylord family. “I think it’s due to Edith Gaylord. She truly was the journalist and was the one that broke the barriers in Washington, D.C. She was the one who got it,” Hale said. Gaylord, daughter of E.K. Gaylord, reported for her father’s paper until she was hired by The Associated Press (AP) and transferred to its Washington, D.C., bureau. She was the first female member of the general news staff and became president of the National Women’s Press Club in 1944. She was Eleanor Roosevelt’s press secretary, media liaison and friend. It is her legacy as a competent journalist, not a competent woman journalist, that remains her most significant contribution. “She was an amazing friend, very direct, no nonsense,” Hale said. Hale wrote Gaylord’s obituary for The Daily Oklahoman. Unsurprisingly, Gaylord fact-checked it herself. Vivian Vahlberg became The Daily Oklahoman’s Washington correspondent in 1971. She became the first female president of the National Press Club in 1982. She echoed the sentiment that Oklahoma is a unique place for women in journalism. “I really relate to the exhibit and the [mission of ] The Pioneer Woman Museum. One of my grandmothers was a prominent woman attorney in the 1930s. That generation helped settle Oklahoma City,” she said. “I grew up feeling like all things were possible.” Vahlberg went on to be president of the Society of Professional Journalists. She now consults for nonprofits that work in journalism.

Broadcast versus print What is interesting to note is the difference in the atmosphere for female television journalists in Oklahoma. While the groundbreakers were in print media, early female broadcast journalists often found it to be more challenging to be treated as equals. Linda Cavanaugh characterized her success as the first female evening anchor as a combination of luck and perseverance — with more of the latter. “People always ask if I aspired to be a broadcaster, and I truly didn’t because there were no role models,” she said. Spending time around KFOR made her realize it embodied all of the reasons she became involved in journalism. As fate would have it, the Federal Communications Commission required broadcast newsrooms to start hiring women at about the same time. Station management put her on the evening news — after waiting for the ratings season to end, of course. She said it was an “experiment.” “The minute we heard the word, ‘experiment,’ we started saving my paychecks,” she said. “I wasn’t prepared to have to prove myself; I was just prepared to do it the way it was supposed to be done.” This refusal to be treated as anything less than a colleague helped her go on to be one of the most successful television journalists in state history.

Television pioneers Jenifer Reynolds, host of Oklahoma Department of Tourism’s Discover Oklahoma, is another household name in Oklahoma television journalism. “You know you’re old when you’re featured in an exhibit,” she quipped. She has helped plan the exhibit since its inception. “If you think about the women and the strength it took to come and settle this place ... we have pioneers in space and aviation, it only seems natural that we would in journalism,” she said. She readily admits how she benefited from the women who came before her in her field. “I looked up to Linda Cavanaugh and Jane Jayroe and Lola Hall. They made you know it was possible ... that was a new thing in my generation, the idea that you could do anything,” she said. Reynolds got her start at KOSU and moved to television in 1988 as KWTV’s primary capitol reporter. While at Oklahoma State University, she won the duPont-Columbia Award, the equivalent of the Pulitzer Prize in broadcast journalism, and is the only college student to have ever received the honor. In addition to being co-host of Discover Oklahoma, she is president of Sandbur Productions, LLC in Jones, OK.

Going national Rebecca Dixon was the first female sports commentator to host a network sports show, Wide World of Sports in 1987. “I thought it was a good time. There weren’t any women in the sports field. I was looking for a window of opportunity that wasn’t as competitive. Channel 8 [KTUL,Tulsa] was the top affiliate, and it got that way by being innovative and taking risks. I was fortunate. The timing was right,” she said. While covering a national sports event, she caught the attention of some of the sports networks, which catapulted her into Wide World of Sports. She said that holding down such an demanding career and raising a family were difficult. “It was one of the major reasons I left ABC and formed my own company,” she said. Due to her experience, she makes every effort to accommodate women who work for her and choose both a career and family. “I try to give them flexibility. They are happier, and their families are happier. That’s something I wish I would have had when I was raising my young children,” she said.