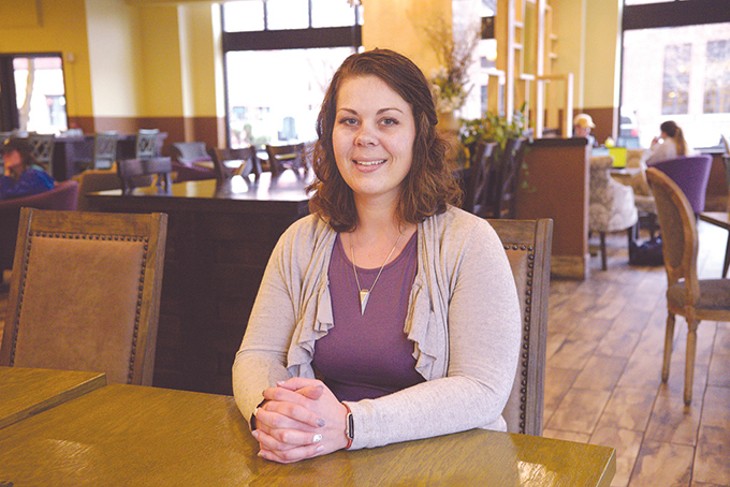 Calls and emails to the Oklahoma Women’s Coalition in Oklahoma City have surged for months amid a renascent push for women’s rights. The messages include women sharing their experiences with sexual assault or discrimination and women expressing their desires to get involved in the renewed battle for equality.

Liz Waggoner, the coalition’s executive director, said the #MeToo movement compelled Oklahoma women to no longer be silent about the sexual harassment, violence or discrimination they’ve experienced. Perhaps just as important, women are asking what can be done to turn the hashtag into action, improving the lives of women and girls.

“The #MeToo movement shows that women are not alone in this,” Waggoner said. “And when we rise together and unite, things can change.”

The Oklahoma Women’s Coalition, the state’s leading advocacy organization for women and girls, sees the national conversation as a hopeful moment, one that could bring lasting change in a state that ranks towards the bottom in areas that affect women’s lives. Oklahoma’s female incarceration rate is twice the national average and nearly half of women have experienced intimate partner violence. The state ranks fourth in the nation for women killed by men, only 14 percent of state legislators are female and the gender wage gap is wider than the national average.

Clearly, women and their male allies have their work cut out for them. The issues aren’t easy, and it takes starting small.

An example of starting small is Sen. Kay Floyd’s Senate Bill 1581, which calls for creating up to 12 weeks of paid family leave for state employees. The coalition backs the Oklahoma City’s Democrat’s legislation as paid leave can be a game-changer for families struggling to pay their bills and serving as a caregiver to an ill child, spouse or elderly parent. The legislation, if passed and signed by the governor, could serve as the stepping stone toward the Legislature establishing a paid family leave law providing eligibility to private sector workers, which states like California, Minnesota, Washington and Wisconsin have done. For the third year in a row, the coalition is supporting pay transparency legislation to make it easier for women to learn how their wages compare to their male co-workers. Pay transparency is viewed as a small step toward gender pay equality in a state where women are paid 73 cents for every dollar paid to men.

“Women are coming to the front,” she said. “Now, women are realizing that when we use our voice, people listen and it encourages others to do the same.”

Thousands of women and their allies assembled at the state Capitol on a Saturday in January for the second annual Women’s March on Oklahoma. March organizers like Maurianna Adams saw an opportunity to build a singular day of protest into a sustained movement. The issues voiced by marchers didn’t just touch on sexism, but also racism and classism. While volunteers passed out voter registration forms, speakers pontificated on what the crowd could do next. One of many suggestions was to share personal stories, which can motivate the public and policymakers to enact policy change.

In the wake of the #MeToo movement, women’s stories have strength. The phrase “believe women” has clout beyond stories of sexual violence.

Across the nation and in Oklahoma, there is an unprecedented surge in first-time female candidates running for offices at the local, state and federal levels. One such candidate is Chelsey Branham, a Democrat seeking to flip a traditionally Republican House seat in a northwest Oklahoma City district.

Branham’s motivation to seek the House District 83 seat came from repeated instances where she saw state lawmakers represent the interests of a few over the interests of their constituents. A Sally’s List-trained candidate, Branham has been actively campaigning for 18 months and knocked more than 3,000 doors.

While the women seeking public office encourage Branham, she said the trend must continue. Research supports that elected women make the most effective lawmakers, from their abilities to reach across party lines and form coalitions to successfully ushering bills through the legislative process. Branham has first-hand knowledge of the effectiveness of female legislators through her advocacy role for the YWCA Oklahoma City.

“The reason we don’t have more women in office is a complicated issue,” Branham said. “One reason is that women don’t run and haven’t. Running for office is not fun and not glamorous. It’s hard. Women are often the primary caretakers. …These are the people we need to run. Those who understand the difficulties and knowledge of life.”

Yes All Daughters began as a grassroots group with a Facebook page and a call for Norman High School students to walk out of class in late November 2014 to protest the bullying and treatment of sexual assault victims. Parents and community members joined the students and called for the district to implement protections for survivors of sexual assault and rape after several students came forward accusing a male student. The walkout spilled into Norman streets, lasted for hours and captured the attention of the media and district leaders.

Yes All Daughters’ leaders earned a meeting with Norman Public Schools’ leaders resulting in the creation of a task force to review the district’s policies and procedures for sexual assault victims. Months later, Yes All Daughters crafted legislation with Rep. Claudia Griffith, D-Norman, that required schools districts to develop rape and sexual assault prevention programs for students and staff. The governor signed the legislation in June 2015.

A few months ago, Stacey Wright, founder of Yes All Daughters, and Rep. Jacob Rosecrants, D-Norman, sat around her kitchen table drafting legislation to provide for professional development of consent and healthy relationships for public teachers and administrators. A year ago, state lawmakers defined consent under the law. The 2017 proposed legislation is called Lauren’s Law, named after Lauren Atkins, a Norman teenager who came forward last fall to share her own experience with sexual assault. The perpetrator later told Atkins they were unaware of the state’s consent law. Last week, Lauren’s Law, or House Bill 2734, passed a House committee on a unanimous vote.

“A lot has been invested in domestic violence prevention, but little has been invested in sexual violence prevention,” Wright told Oklahoma Gazette two days after the bill passed the House committee. “We know based on the recommendations from the Center for Disease Control and Prevention that these lessons have to start early. It doesn’t have anything to do with sex or dating relationships. It’s about boundaries, interpersonal skills and conflict resolution.”

Since it’s founding on Nov. 9, 2014, Yes All Daughters has sought to prevent sexual assault and to help those who are survivors. So far, their energy has been focused on legislation as the group sees an opportunity for the state to provide relationship education in public schools. In recent months, the organization has seen an uptick in visits to its Facebook page. People are listening and lending support. A year ago, a similar bill on healthy relationship education backed by Yes All Daughters never received a hearing.

“We are riding a really big wave this time,” Wright said. “We did before because of the momentum of that moment. This is different. I don’t think it is going to go away like it has other times.”

Print headline: Equality in focus; Women’s issues are surging in Oklahoma amid a national conversation around equality.