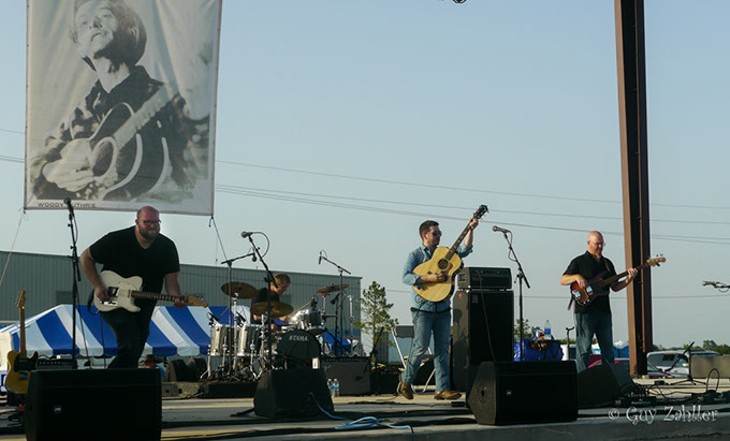 The Woody Guthrie Folk Festival celebrates its 20th anniversary in 2017, but it will do so while facing an uncertain future.

John Robertson, treasurer and former president of the Woody Guthrie Coalition, which puts on the July folk and music festival that fills the Okemah community with entertainment and guests from around the world each year, said the event is approximately $20,000 in debt — a hole that has only widened over the past five years.

Jan. 4, the group launched a $60,000 GoFundMe crowdfunding campaign to help ensure the festival’s future. At press time, the campaign had raised just over $4,000.

“I know there are at least 3,000 persons out there who would be willing and able to donate $20 if they knew WoodyFest needed help financially,” said Karen Zundel, the festival’s media chairwoman.

Troubles began during Guthrie’s 100th birthday celebration in 2012. The coalition intentionally threw a grand WoodyFest celebration that year, thinking some of the expenditure would be recouped in following years. A recent downturn in the state economy made a rebound much more challenging.

“The Woody Guthrie Folk Festival has always been a near break-even event,” Robertson said. “It was never intended to make money; just pay the bills and host a great event.”

In the past, Oklahoma Arts Council has provided the organization with annual grants, which largely funded the event. Organizers also have drawn funding from merchandise sales and corporate sponsors and partners.

Oklahoma Arts Council was forced to decrease its role after large cuts to state arts funding, Zundel explained. Additionally, WoodyFest lost oil-business sponsors due to a collapse in the industry. Other sponsors have dropped out, citing the state’s generally tough financial climate.

Traditionally, festival admission was free. In 2015, however, organizers were forced to start charging admission. Ticket prices for 2017 have not yet been finalized.

Mother Nature also has not done the festival any favors. Robertson said the event was plagued by heavy rain the last two years — a true detriment to any outdoor music festival. Both years, festivities were moved to smaller, indoor venues.

Organizers don’t have a paid staff or an office. The board is comprised of members from around the country who discuss business during conference calls.

“Somehow, those board members have managed to pull off a festival for 19 years,” Zundel said. “Think about that. We often donate out of pocket because that’s how much the festival means to us. I think we’re all pretty exhausted right now from the continual struggle to pay our bills.”

Thousands have attended the event since it began two decades ago. Zundel said she hopes organizers will find enough new sponsors and willing fan donors to keep the event going for decades to come. There is no chance this year’s festival will be canceled, but WoodyFest’s future is not as certain.

Zundel said if the festival is ever lost, the state and country will miss out on a truly special tribute to Guthrie’s legacy.

“There is a certain magic that happens in Okemah every July,” she said. “Anyone who has ever attended the festival, whether it be musician or attendee, can attest to that.”