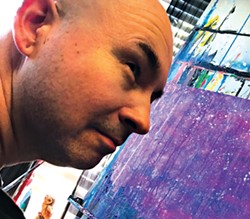 There have been many portrayals of American Gothic great Edgar Allan Poe throughout art, but few quite like the slender, resin-coated bust by local artist Harold Neal.

Poe’s iconic face, in this instance, has been merged with the subject of his most famous poem, “The Raven.” The writer is given a long, sharp beak and spiky wisps of black-and-blue feather hair. The sculpture’s head and shoulders look and feel almost like a blown-up action figure. Neal built the bust by covering a ceramic armature frame with a black epoxy coating.

“I want it to last a long time,” Neal said. “It’s a very sturdy material.”

The sculpture — simply titled “Edgar Allan Poe” — is one of many literary-themed art pieces included in Neal’s Off the Page exhibition, which is scheduled to debut at The Paseo Plunge, 3010 Paseo St., during The Paseo Arts District’s First Friday Gallery Art Walk Friday. The show runs at The Paseo Plunge through March 25.

Off the Page features paintings and sculptures that aim to bring beloved characters from literature out of the imagination and into a gallery space. Neal and a cast of other artists will offer their literal or figurative interpretations of characters from H.P. Lovecraft novels like The Call of the Cthulu, different mythologies and a wide variety of other works.

Neal’s love for art — which includes acrylic, impressionist-style paintings, pottery and some jewelry work in addition to sculpture — is often inspired by his love for literature and science fiction.

“Whatever I’m reading at the moment I get obsessed with,” he said.

Off the Page is co-presented by Charles Martin, founder of The Paseo Plunge-based bookstore and publisher of Literati Press. He said the exhibition perfectly fits into Literati’s core mission.

“We’re trying to bolster the view of literature as another art form,” Martin said. “We’re in the midst of the oldest arts district in the entire state, so people come here anticipating visual art, three-dimensional art. We want to make sure that poetry, fiction, nonfiction, comics — all these things — are held in the same esteem.” 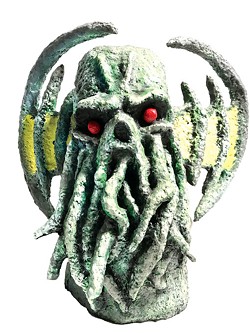 Initial talks on what would become Off the Page began around Neal’s involvement in another Paseo Plunge art show in 2017. Literati Press published a book of secular blessings titled The Non-Prophet Book of Common Prayer, and for the book’s launch, the shop put out a call for artists to visually depict a select blessing from the book.

Neal saw the call and offered his own art assistance. He immediately fell in love with the book.

“I connected to the very first two I read,” he said.

At the book’s launch and opening art show, Neal began talking to Martin about doing a show that would combine his loves of reading and art. Martin was a fan of Neal’s style and thought the show would be a good fit for them.

Martin has noticed that a lot of Neal’s pieces have a narrative quality to them, even when they are not figurative.

“You look at it and you’re wondering about what the story is, like you’ve got this one slide from a long story,” he said. “It makes you want to figure out what has happened before and after.”

Neal’s favorite book of all time is Geek Love, the 1989 novel by Katherine Dunn, and for good reason.

“I think that was my way into getting married to my wife,” he said.

Neal was being a wallflower at a backyard birthday party one day when he struck up a conversation with Della, his future wife, by a large outdoor trampoline. They were drinking beers and talking about books they loved. Neal mentioned how much he loved the surreal story of life in a carnival family. He watched as Della’s face lit up.

Aside from van Gogh, Neal said he is inspired by the work of Salvador Dalí and Francis Bacon as well as the less-known illustrations by famous filmmakers Clive Barker and Tim Burton.

Neal’s love for literature and art grew at a young age almost simultaneously. His mother made an effort to instill a love of critical reading in him early on. She would often drop him off at the local library, leaving him there for hours as, essentially, a form of daycare.

“I would be sitting there, drawing, if I wasn’t reading at the same time,” he said.

Neal attended art school for a while but dropped out after becoming disillusioned with formal learning.

“I didn’t think they needed to teach me anything,” he said. “They could have taught me a lot about business, though. That’s what I didn’t listen to, and I should have.”

Not all of Neal’s work is directly inspired by literature. Reflecting his taste in fiction, a lot of it is dark and personal. His fictional depictions, however, are the things most people can relate to.

“I have a lot more personal stuff that I do for shows,” he said. “It seems like people connect more with the literature and the stories than they do the angry self-angst.”

Neal hopes Off the Page becomes an opportunity for him to connect with other artists. He also thinks the show has a good shot at attracting a crowd that isn’t too familiar with the state’s local art scene.

“Come support local artists and local writers,” he said, “because there’s a lot of local writers who sell their stuff here. Oklahoma’s emerging, and we’ve got our own style.”

Print headline: By the book, Work by Harold Neal and other local artists brings literary characters to life in Off the Page.

Off the Page opening