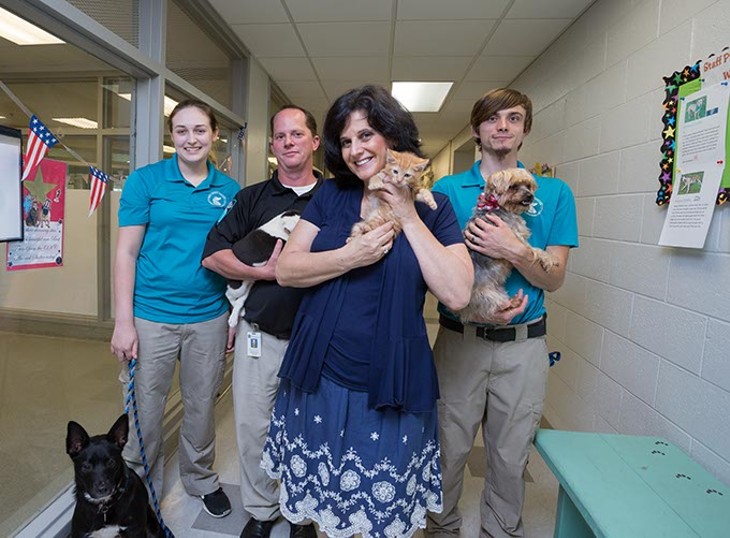 You might have heard about a “kitten overload” at the Oklahoma City Animal Shelter this summer.

Thanks to outreach programs getting the message to the community, a lot of those kittens are getting new homes.

In fact, at an Oklahoma City Council meeting earlier this year, Superintendent of Animal Welfare Julie Bank released the shelter’s 2015 year-end statistics containing the best release rate of live animals the shelter has ever seen.

“It’s much more successful than it was 10 years ago,” Bank said, “but we still have a lot more work to do 10 years from now.”

Seven out of every 10 animals getting adopted, reunited with owners or transferred to other adoption agencies is a great statistic, but as Bank said, the shelter still houses too many animals.

The kitten problem is partly due to summertime coinciding with breeding season for cats.

“It’s like a switch goes off,” Bank said. “Boxes and boxes of kittens will be coming in like crazy.”

We can’t blame cats for following their natural instincts. Bank said the problem is 100 percent avoidable and stems from cat owners not having pets spayed or neutered.

June was Adopt-A-Cat month at the shelter, and Bank praised the success of Meowpalooza.

She explained that the community can’t adopt itself out of the overpopulation problem. The real solution is stopping the flow of homeless animals via partnerships with other organizations and providing resources to the public.

The biggest key to the puzzle is spay and neuter resources. Bank said the shelter provides them along with other help for pet owners.

The OKC shelter gives free spay and neuter services to any city resident and partners with numerous others to refer low-cost sterilization.

The Bella Foundation helps by hosting events for microchipping and vaccines. Patrons of OKC Animal Shelter is a nonprofit devoted solely to helping the shelter achieve goals out of the scope of its current budget.

Animal Welfare reported a 35 percent infection decrease in its end-of-year report in addition to the highest live-release rate in memory.

Partnerships with other organizations are a core focus of the shelter because they all face the same issues and it’s important to collaborate.

“We take the pieces of our strengths and try to address the overwhelming overpopulation problem,” Bank said.

Animal Welfare has a pet food bank available for anyone who needs help feeding their pet due to job loss, divorce or any number of reasons. Bank stressed they want to provide and connect people to resources in any capacity.

“Our goal is to keep animals out of the shelter and to keep them in homes,” she said.

Central Oklahoma Humane Society will even pick up pets in certain ZIP codes to provide spay and neuter services and drop the pets back off at home.

With all of these resources available to the public, one might wonder why animals are still overpopulated and homeless.

Bank said some of the boxes of kittens, with or without moms, can certainly be homeless, but that often isn’t the case.

“A lot of them are animals from their individual pets,” she said, “and they just didn’t think of spay/neuter and didn’t know of the options that were available for them … We still get people who say they don’t want to do it.”

Bank said it’s not okay for people to contribute to animal homelessness. She made it clear that pet owners shouldn’t just want a family pet to have at least one litter or show children the miracle of birth.

“These are not humans,” Bank said. “It’s not the same issue. They are okay being spayed or neutered.”

The list of issues associated with irresponsible cat ownership is not solely about spaying and/or neutering.

Unfixed cats are more likely to roam outside, resulting in getting hit by a car, picking up diseases, having flea and tick problems or getting lost.

Bank said cats have the lowest reclaimation rate at the shelter.

A lot of cats are cleaned up from roads after getting hit, and Bank said she suspects most of them are due to owners letting their pets roam.

Since she took over Animal Welfare in January of 2015, the shelter has seen nearly 4,000 less animals coming in. According to Bank, the hard work of everyone at the shelter is paying off.

“The staff have been working tirelessly to make Oklahoma City a better place, and it’s beginning to show,” she said.

The positive numbers have been steadily getting better for the last 10 years.

“I’m just proud to be the leader right now and continue them along,” she said.

Print headline: Cat care, Oklahoma City shelters and organizations are working to get the cat population under control.