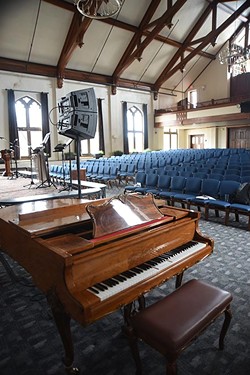 It’s not often you hear about a house of God that plays so well to non-saintly crowds.

But City Presbyterian Church (City Pres) does just that.

It opens its doors, loosens its collar and offers local musicians opportunities to showcase themselves in a heavenly, 350-seat venue.

It started in September with the Midtown Songwriter Series, a quarterly music concert that has already featured talent like Tyler Hopkins, Chase Kerby and Beau Jennings.

“A few years ago, Hopkins and I were having lunch, before the church had a building,” said Bobby Griffith, a City Pres pastor. “We were just starting, and I mentioned it would be cool … if we opened our doors to help out local artists in order for them to get better exposure and maybe make money.”

The venue does a few things other venues don’t. For starters, with its Midtown Songwriter Series, artists get 100 percent of door revenue.

Because the shows are held in the church’s sanctuary at 829 NW 13th St., concerts boast comfortable chairs (pews were removed and replaced with padded, fabric-covered seats), fantastic acoustics and an intimate but not overly small stage setup. But it’s another carryover from Sunday services that most distinguishes the space: respect.

When musicians play bars, open mics and other small sets, they constantly compete for space, both aurally and physically. Beer glasses tink and thud. There’s always Mr. Talk-over-all somehow positioned in the acoustic center of the room. But at City Pres, audiences are attentive, as if their very souls depended on it.

City Pres works to make sure it’s supporting its community, opening its doors for more than Sunday morning services, Griffith said. While music plays a big part of that support, the church’s focus on community also allows for a greater range of events, including hosting other local artist-related events and even things like Harding Charter School’s upcoming baccalaureate ceremony.

“A lot of times, churches don’t have the greatest reputation with the art community,” Griffith said. “We see this as a way to build bridges where, even if we don’t agree on things, we can still care for one another and do good things together.”

The next act to rock the sanctuary will be Chicago-based Twin Peaks on Sunday.

The group formed in 2009 and includes friendships dating back to elementary school. Its popularity swelled following the August release of its latest album, Wild Onion.

In addition to frontman Cadien Lake James, Twin Peaks utilizes dynamic rotating singer-songwriters. Guitarist Clay Frank, bassist Jack Dolan and James take turns as they float around the band’s daydreamy, psychedelic garage groove. In effect, the album almost appears to be three different bands, which makes sense for an outfit with influences as broad as The Pixies, Black Lips, Thee Oh Sees, The Beatles and The Beach Boys.

From here, the band heads to Austin for several high-profile, official South by Southwest festival showcases.