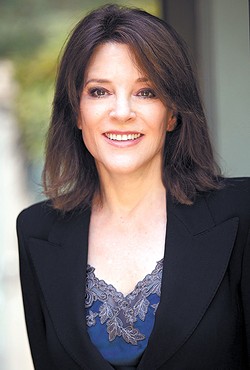 In the early 1990s, Marianne Williamson wrote in her first book, A Return to Love: Reflections on the Principles of a Course in Miracles, “Love is what we are born with. Fear is what we learn. The spiritual journey is the relinquishment — or unlearning — of fear and the acceptance of love back into our hearts.”

Williamson’s insights on the application of love in search for inner peace resonated with millions of readers. The book went on to become a New York Times best-seller, and Williamson emerged as a spiritual leader, appearing on The Oprah Winfrey Show, Larry King Live and Good Morning America, among others.

Around that same time, in 1995, Karen Carothers received a copy of the book from a friend’s daughter. A year later, she joined a Course in Miracles study group, which continues to meet on Sunday evenings in her Oklahoma City neighborhood. On the first and third Tuesday nights of each month, Carothers listens to Williamson’s live-streamed talks.

In January, Williamson, a 2014 candidate for California’s 33rd congressional district, announced her Love America Tour, publicized as an effort to promote political renewal. Carothers immediately imagined Williamson returning to the OKC metro as part of her tour. Through Facebook Messenger, the local resident invited the internationally recognized speaker to Oklahoma City. So did another one of Carothers’ friends. In a day’s time, Carothers heard back from Williamson’s team. They were interested.

Williamson addressed an Oklahoma City audience at a fundraiser for Justice Alma Wilson Seeworth Academy in 1998.

“Her message is just so well received wherever she goes,” Carothers said. “People want to hear messages of hope and unity, and we love America.”

Williamson’s Love America Tour will stop at the University of Central Oklahoma 2-4 p.m. Sunday at Constitution Hall in Nigh University Center, 100 N. University Drive, in Edmond. A book signing and reception follow the ticketed event. Respect Diversity Foundation, a local nonprofit that promotes tolerance, acceptance and respect, is the sponsoring organization.

The Love America tour is billed as a discussion on “how a revolution in consciousness paves the way for both personal and national renewal,” according to Williamson’s website. Williamson argues that fear and hatred have turned into a political force. For democracy to survive, it will take a response of love and decency, she said.

It will be a relevant address during a time when the political divide grows wider daily.

“I have found in Oklahoma City, which has been our home since 1971, that there is so much activity going on here,” Carothers said. “So many people are rising up to do things that are remarkable in areas of mental health and education. I just felt like this talk was the right talk at the right time. It’s happening.”