Writer-in-residence falls in love with OKC 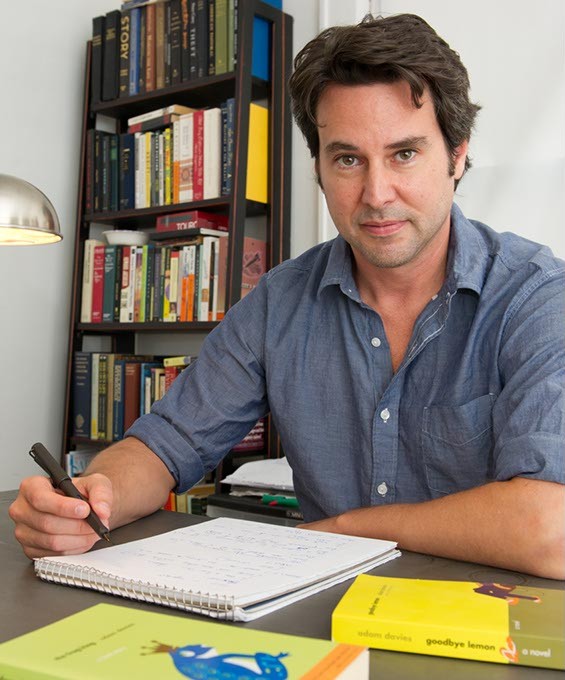 He has written three novels. Katharine Hepburn was his grandmother by marriage. Beginning in 1994, he lived in New York and spent his evenings at Elaine’s, the legendary restaurant dedicated to writers in the Upper East Side. On one occasion, he protected his plate from the grubby hands of “that hobgoblin” — and Pulitzer Prize-winning author — Norman Mailer.

On New Year’s Day, Elaine kicked him out of the restaurant when his date slipped and sprained her ankle while flirting with Charlie Rose. He has a tattoo of a star on his right arm, inspired by an intricate dream involving the wish-granting Zoltar machine from the 1988 movie Big and floating stars as currency. He’s Adam Davies, and earlier this year he moved to Oklahoma City.

On a Sunday night, the charismatic novelist and journalist related these stories at The Other Room, 3009 Paseo St. The bar was crowded. Two young women seated in the booth behind him sang along to ’90s pop hits blaring through the speakers. A football game was on the plasma screen televisions along the walls, and most of the patrons vocalized, without hesitance, their opinions of each big play.

It did not bother Davies. Rather, he thrived on the noise, on the energy of it all, laughing loud and often, shifting from story to story. Between drinks of Famous Grouse Scotch whisky, he explained how he ended up in Oklahoma and how he fell in love with the state.

The University of Central Oklahoma’s College of Liberal Arts selected Davies as its writer-in-residence for the Fall 2014-Spring 2015 school year. Despite his interim position, he bought the first house he has ever owned after a short time renting an apartment.

“I moved here with nothing. I can’t imagine leaving it or not being a part of it. Sure, there are some things I don’t like ... but nothing is more important than people. The people here are kind,” he said.

Although he has lived in cities noted for their art — New York, London, San Francisco — he said he was blown away by the art in Oklahoma City.

Settling down was hard-earned for Davies. He has worked several odd jobs to make ends meet. At one point he smashed eggs over his head for money.

“I’d wait outside of bars, and drunkards would come out. For one dollar, I’d break an egg over my head. For two, they could do it,” Davies said.

Then he fought professionally.

Then he wrote papers for unmotivated teenagers.

“I had business cards made up. I called it Tony’s Writing Service. I went to the local high schools and colleges and passed out my cards in the parking lots and hallways. Then I worked as a book editor at Random House. That was my first honest job,” he said.

When Davies was a senior in college, he realized he wasn’t a good waiter and needed to put forth extra effort to land a literary career. He read each book Random House published while standing in the aisle at a bookstore. He sent two reader reviews per week for eight months to an editor at the company. Eventually, the editor contacted Davies.

He worked as an editor’s assistant at Random House for three years. He edited George Saunders, Colin Powell and Primary Colors by Anonymous (who was later unveiled as political columnist Joe Klein).

His first novel, The Frog King, published in 2002, captured his experience in the publishing industry. The novel received mass critical praise and became an international bestseller. Bret Easton Ellis adapted a screenplay from the novel, and a production company is moving forward with the project.

Davies followed The Frog King with Goodbye Lemon in 2006 and Mine All Mine in 2008. He has also won several awards for his magazine writing. He has been published in The New York Times and Popular Mechanics.

After a vague number of Scotch whiskies, Davies switched to water. It was late; the crowd waned. He said Oklahoma had been good to him creatively. He felt strong about his writing. “Now that my house is done, everything unpacked, I might just sit in my chair for a while,” Davies said.

Print headline: Writer in residence, Novelist Adam Davies has done and seen a lot, but nothing prepared him for how much he would love Oklahoma.