Writer of the Quarantine: Dennis Spielman

Dennis Spielman is a filmmaker and writer whose most notable work is his travel and interview series, Uncovering Oklahoma. He is the founder of The Show Starts Now Studios, which produces several series such as Art & Victory, Quarter Minutes, Tales Unveiled, and Yes! Science! In addition to his various shows, he is the author of the 16th Phoenix Universe Stories and has made several feature-length documentaries. For 2020, Dennis has challenged himself to write a short story every week on his website, dennisspielman.com, so visit it for more stories. Dennis currently lives with his wife in Norman, Oklahoma, with their dogs. 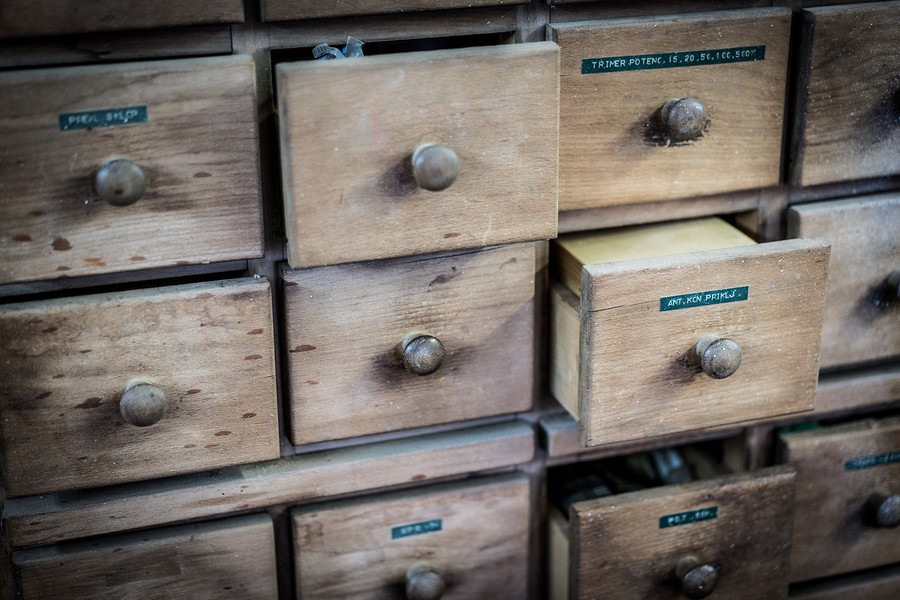 Janelle halted her morning jog when she came across an intriguing new boutique, as yesterday, the retail space was empty. Through the glass windows, Janelle would've for sure seen people installing the drawers that covered the walls from the floor to ceiling. The shop was part of her apartment complex in Film Row, and she couldn't recall reading about it in Oklahoma Gazette or her neighbors talking about it. As Janelle thought back, she could've sworn when she passed by during the start of her daily run, there was a "For Lease" notice on the door instead of a cheerful "Open" sign.

With time to spare and her curiosity piqued, Janelle went inside. All three walls were covered in drawers of varying shapes and sizes but had a matching white, rustic farmhouse esthetic. The beach lavender aroma put her in a relaxed state of mind. Janelle walked over and inspected a label on a drawer. It read, "Brave."

Standing in the center of the room was a young woman in a red satin dress holding a transparent tablet device. Next to her was a taller, slim man in a pink suit with bold, black outlines. Both had black hair and lanyards holding placards with their names, Raven and Loki, respectively.

"Yes. We sell a wide assortment of personalities that you can give yourself to change your life," Raven explained. "If you want to be more likable, we can help."

Janelle kept her skeptic tongue to herself. She figured this whole ordeal was some pop-up artistic expression or experience. She scanned the drawers and noticed they were all labeled with various personality traits, including negative ones.

"Why would anyone want something like an ‘obsessive’ or ‘creep’ personality?" Janelle inquired.

"You can give them to others," Loki revealed.

"Including your enemies," Raven added with a wink and a wave of her finger.

"Weaponize them to get rid of unpleasant coworkers," Loki commented, and Raven nodded in agreement.

"Buy as many as you like." Raven smiled. "But no returns."

Janelle turned her attention to the drawer that caught her initial focus, the one labeled, "Brave." She opened it up and pulled out a white index-sized card with the word written in a bold font fitting of the name. Even if the card didn't magically give the trait, she thought it would make for a cute decoration for her desk.

Janelle showed the shopkeepers the card. "How much for this one?"

"Since you're our first customer," Loki started.

Janelle closed the drawer. "So, how does this work?"

"Simply put the card on the forehead of the person you wish to give the personality trait," Loki explained.

"I'll take this one and try it out," Janelle said, still skeptical. "Thank you."

To keep the card from getting bent, Janelle held it until she returned to her apartment. Once inside, she tossed her keys on the kitchen counter. She looked at herself in her hallway mirror and put the card up to her forehead. The card faded like her body had fused with it. Instead of causing her to freak out, the new personality had filled her with excitement.

Janelle went about her morning routine with vigor as she arrived, first as usual, to the law firm. She took one look at her desk, marched to the break room for a box, and pushed all of her belongings inside. Her boss, whose name was on the sign outside, found Janelle packing up.

"Everything okay?" Janelle's boss asked her with concern.

"Never better. I'm going to start the yoga studio that I've always been too afraid to do."

"Good for you, Janelle! If you ever do a beginner's class, I'll sign up."

"Thank you. That means so much. Everyone here has been so great to me, but I must move forward."

Janelle left the law firm with her box, her mind racing with a business plan. In the cleanup process, she decided to open her yoga studio in her apartment complex. There were several vacant spots. She knew one of them would be perfect.

As she walked back to her place, a dog ran across the street, chasing a squirrel. Janelle could see the bus hitting the dog. Without hesitation, she dropped her box and pushed the dog to safety and the bus hit her.

A few hours later, Janelle woke up in a hospital bed. Every part of her felt numb. She rolled her head and saw Raven and Loki standing over her.

While Raven wrote notes in her tablet, Loki held out a bouquet of spring flowers.

"All sales are final."