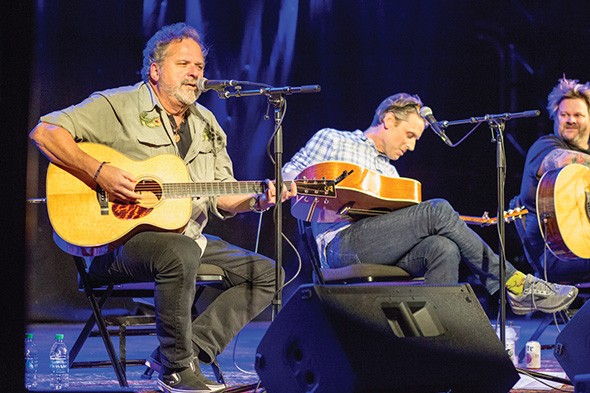 Since Oklahoma-born musician and songwriter Zac Maloy moved to Nashville, Tennessee, nearly a decade ago, he has scored hits but also become immersed in the city’s unique songwriting culture.

The Bluebird Cafe might be Nashville’s most famous place to experience an intimate performance by a writer in the round; the cafe was portrayed on the television series Nashville, and it is where Taylor Swift got discovered and Maloy performed with the songwriter behind Tim McGraw’s No. 1 hit, “Live Like You Were Dying.”

“In some ways, it is more amazing to hear the guy who spawned the idea,” Maloy said of writer-in-the-round shows, where groups of songwriters take turns telling stories and performing the songs made famous by other musicians. “In Nashville, there are literally two shows a night at 10 different places like it. In Oklahoma City, it is more of a unique thing. I think it’s happening more [in OKC] locally, and we want to promote the culture.”

Maloy is a founding member of The Nixons but has found success in Nashville, where he penned No. 1 songs for Carrie Underwood (“Temporary House”) and Skillet (“American Noise”) along with songs for many other artists such as Adam Lambert and Blake Shelton.

Other Nashville-based songwriters performing at the festival include Brett James, David Hodges and Marcus Hummon. James, who is a Del City native, is one of the most accomplished songwriters in the industry, winning 2010 songwriter of the year from American Society of Composers, Authors and Publishers (ASCAP). James has written No. 1 songs for the likes of Underwood, Kenny Chesney, Jason Aldean, Chris Young and many others.

“[James] has had so many No. 1s that I won’t even go into it,” Maloy said. “The first year I moved to Nashville, I went to ASCAP when he was songwriter of the year. He had something like six or seven No. 1s in a six-month span, which is insane. I’ve known him since I moved to Nashville because people kept telling us to meet since we’re both from Oklahoma.”

Hodges is a founding member of Evanescence and has transitioned into songwriting since leaving the band. Maloy and Hodges did writing sessions together in Los Angeles before they moved to Nashville and co-wrote a Tim McGraw song with Tom Douglas, “Words Are Medicine.”

“I might sing [“Words Are Medicine”] and [Hodges] might harmonize with me. He’s really the wild card of the show because I don’t really know what to expect with him singing Evanescence, but he’s going to sing some,” Maloy said. “I think it’s crazy cool. Meanwhile, he wrote the Kelly Clarkson song ‘Because of You,’ which is just one of his Grammys.”

Hummon is performing at Oklahoma Songwriters Festival for the third time. His credits include No. 1s for Rascal Flatts (“Bless the Broken Road”), Dixie Chicks (“Cowboy Take Me Away,” “Ready to Run”), McGraw (“One of These Days”) and Wynonna Judd (“Only Love”).

“Marcus has been to my show so many times that he feels like an Okie, and I tell people that because he wrote a musical about Jim Thorpe, he is one,” Maloy said.  “The lineup this year, I’m not just saying this, it is the strongest and coolest one yet.” 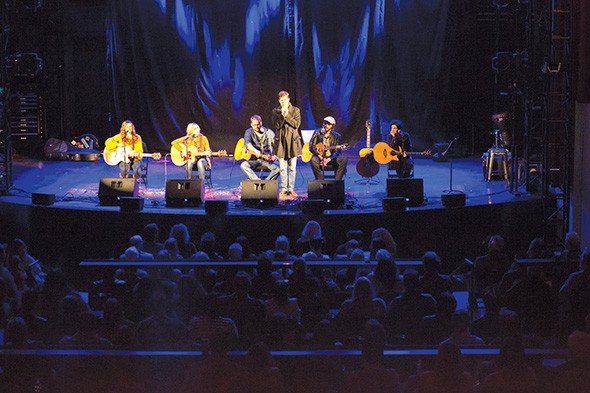 James, Maloy, Hodges and Hummon will perform four to five songs each, taking turns between each song and telling behind-the-scenes stories about their creation.  Jabee and Tyson Meade also perform that night.

The night will open with local songwriters Tyler Hopkins, Graham Colton, Beau Jennings and Kinsey Charles, who will all perform two to three songs. Last year’s festival was the first to include local songwriters.

“I snuck into the back of the Tower and watched [the local songwriters performance],” Maloy said. “I thought it was so cool, and I had so many people come up to me after the show and say, ‘Yeah, it was cool to see you guys from Nashville sing songs that we know and hear the back stories,’ but I got so much positive feedback saying that was really cool to see these local people and understand that there are songwriters living among us.

“When I dove in and tried to find four local people, I listened to 30 or 40 local people’s music, and I’m blown away at the talent in Oklahoma that is still there. People think about the talent that’s not there like Garth Brooks, Blake Shelton, Carrie Underwood, Vince Gill, all these expatriates, but the whole reason for doing this event was to bring a little bit of Nashville back to Oklahoma and to expose the fact there is still a ton of talent [in Oklahoma].”

The festival begins Friday as local songwriters pair up with the counterparts from Nashville to work on collaborative songs. There is a $100-per-person dinner at Flame Brazilian Steakhouse at Grand Casino in Shawnee, the festival’s main sponsor, available for purchase through social media.

Tickets to the Saturday night performance are $14-$40 and include a VIP option to meet and greet with the songwriters.