The surprise album is a popular music trend. Some artists, including Beyoncé, U2 and Kendrick Lamar, opt to keep project release dates a secret until they’re suddenly dropped online. This strategy runs counter to traditional album promotion, but hungry markets force the industry to re-examine how things are done.

However, every shared secret includes someone itching to spill it. Jenn Wasner, vocalist and guitarist for Baltimore-based indie-rock band Wye Oak, was eager to share the outfit’s new album, Tween, with the world.

Released June 9 to the public without warning, it is effectively a compilation album featuring previously recorded material, shelved and reworked between 2011 and 2014, though its last song, “Watching the Waiting,” was written for this project. 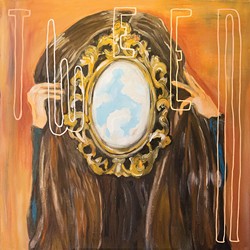 “It’s really nice to finally be able to let the world know [about Tween],” she said.

Wye Oak, which also includes drummer, keyboardist and backup vocalist Andy Stack, is on tour to support the project. It performs 10 p.m. July 29 at Opolis, 113 N. Crawford Ave., in Norman.

Surprise albums generate excitement, but they also create challenges for artists ahead of the release.

“We were like, ‘Well, we have to get this record out so that people will know there’s something cool for people to come to these shows for,’” she said.

Tween’s release was coupled with the debut of the “Watching the Waiting” music video. It stands out in the Wye Oak catalogue because it features rare on-camera appearances by Wasner and Stack.

Wasner said she wrote the song about learning to be at peace with oneself. “Watching the Waiting” features a relaxed vibe to complement the idea of being at ease with the things that make us who we are.

“I’ve had so much of a struggle just learning how to inhabit and be comfortable representing the things I make, both physically and superficially and psychologically,” she said.

She wants to embody the concept of radical vulnerability onstage and in her art. When fans pay for an album or to see a concert, she said they’re paying to see or hear them do something they’re not doing in that moment or might never do. They want to see something real and honest, and a level of vulnerability comes with that.

“No part of me wants to edit out the flaws, because that would defeat the purpose, but it’s still like this weird battle between the two sides of my brain,” Wasner said. “The one side that I feel like is really me is being like, ‘It’s important to put yourself out there, the way you really look, the way you really feel.’ Then there’s the other side that’s just like, ‘I just want to be cool and look good.’”

It’s a message that especially rings clear in a world driven by social media, where everyone has the chance to meticulously craft their public image.

“I try to remind myself that I’m happier when I’m able to kill the shitty parts of my ego every single day,” Wasner said. “It’s hard because you need to be constantly aware of it to do it. It’s hard when your job involves being physically on display.”

Wasner said there is some more music left in the Wye Oak vault, but it’s so old now it might never see a public release.

She is, however, pleased with the response Tween has received.

“I’m thrilled. I feel like we really couldn’t be doing any better with it,” she said. “And it’s really fun to play.”