In the 1985 cult classic film Tampopo, food is one of the main characters alongside Gorō (Tsutomu Yamazaki) and his sidekick Gun (Ken Watanabe).

Publicity for the film called it the first “ramen Western,” as a Japanese nod to the spaghetti Westerns filmed in Italy. The creative minds behind 84 Hospitality Group — founder Rachel Cope and executive chef and partner Jeff Chanchaleune — used Tampopo as inspiration for its first concept, Gorō Ramen.

They have returned to Tampopo with their latest concept Gun Izakaya, 3000 Paseo Drive, which opened July 5. In Japan, an Izakaya is a casual pub, where friends and family gather around drinks and meats cooked over open flame on a yakitori grill.

“This concept was originally supposed to be part of Gorō when we first opened,” Chanchaleune said. “I had high ambitions for a tiny restaurant. I figured out I couldn’t do it and took off ‘Izakaya’ from the branding [at Gorō Ramen]. I ran with noodles for a while. I’m glad I did because I was able to travel a lot more.”

Chanchaleune and Cope are common travel partners, touring Japan and surrounding countries multiple times together in recent years. Every trip to Japan, he makes an effort to stay near Memory Lane, a Tokyo hotspot for small, family-owned yakitori shops.

“I always make an effort to try as many different shops as possible,” he said. “This is my passion project. I love noodles and I’m good at noodles, but this is always the restaurant that I wanted to open. A lot of people think grilled chicken is simple, but there is a lot of technique that goes into it, the charcoal that goes into it, managing the temperatures.”

Chanchaleune is a history buff, adding precise decades when talking about cultural shifts in Japanese history.

“For food and atmosphere, I wanted to blend old Japan with modern-day Japan,” he said. “Old Japan ended in 1868, and that’s when the modern era exploded.”

"I love noodles and I’m good at noodles,
but this is always the restaurant
that I wanted to open."
—Jeff Chanchaleune tweet this

Gun Izakaya, designed by Fitzsimmons Architects, blends traditional elements like wood backing on the walls and inlays above two bars — one housing the charcoal grills and another housing liquor.

The old and new blend together in “The Last Service,” a contemporary street art mural by artist Juuri (Julie Robertson) that depicts legendary female samurai Tomoe Gozen holding a bow and arrow, ready to attack.

“She was a badass,” Chanchaleune said. “She’s known for beheading one of [Miyamoto] Musashi’s generals and presenting it to him.”

Yakitori specifically refers to chicken cooked on a skewer over binchotan charcoal, which is made from Japanese oak and covered in ash. It burns at a high temperature for up to eight hours for a single cylindrical piece. Gun serves a variety of cuts of chicken: thighs, meatball and heart marinated in tare, a sweet and savory sauce; chicken skin cooked over the flames until crispy; chicken breast with a spicy kick; and chicken wings. 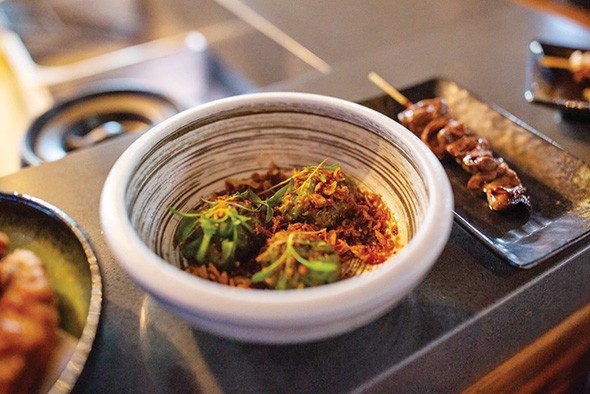 “The charcoal is very dense and emits infrared heat and a lot of energy for a long time,” Chanchaleune said. “It provides a subtle smoky flavor, but you can still taste the meat.”

“With the fire being that hot, it gets the outside crispy without drying out the inside,” Cope said. “It’s amazing. You’ll see the charcoal coloring, and it’s still tender.”

In true Izakaya fashion, the food at Gun is designed for sharing among friends and family. Chanchaleune encourages guests to order a few grilled items; three or four people can all get bites from one skewer and then order more of the ones they like.

The menu includes non-grilled items like a duck okonomiyaki, a savory pancake with cabbage, mushrooms and duck confit cooked in duck fat and topped with duck powder. There are also multiple kinds of dumpling: shumai filled with crab and pork, pork gyoza and vegan eggplant wontons with cilantro that were a hit during Gun’s soft opening.

The menu also includes karaage-fried catfish as a nod to Japanese white fish preparation with an Oklahoma ingredient, Japanese hot chicken legs and a pork sandwich with housemade milk bread. Kare udon is sun noodles with curry gravy and pickled ginger with beet juice to make them naturally red.

Featured prominently at the front of the “bar bar” is a Toki Highball machine, which is thought to be the first of its kind in Oklahoma. Whiskey highballs are a staple of Japanese drinking culture, and the machine perfectly infuses carbonation into a mixture that is four parts soda and one part whiskey for a refreshing drink that is like an alcoholic La Croix with more flavor, especially the charred grapefruit variety.

“I poured one last night for research’s sake, and it was still bubbly more than an hour later,” Cope said.

“The sake list is in my opinion, the most aggressive in the state,” Cope said. “It is meant to be educational. We don’t have any wine, and we did that on purpose. We want people that are wine drinkers to give sake a try. We want to educate on the similarities and differences and see we can change that because for a lot of people they think about hot sake, and that’s just not the case.”