Oklahoma City’s Yale Theater is one of 25 preservation projects vying for funding from Partners in Preservation: Main Street.

Black-and-white photographs from decades past offer a glimpse of the storied history of the Yale Theater, a mainstay of the commercial corridor of Capitol Hill since 1918. There’s no missing the iconic Art Deco marquee marking the Yale Theater and displaying the names of films from yesteryear. There’s no doubt that the Yale Theater was once one of the district’s crown jewels.

Like many of Oklahoma City’s urban commercial districts, the area fell on hard times. By the 1970s and ‘80s, suburban sprawl and the overall poor economy of the city caused Capitol Hill to decline further. The Yale Theater remained open but film screenings were replaced by wrestling matches and livestock auctions.

As a revived Calle Dos Cinco in Historic Capitol Hill greets neighbors and newcomers today, the talk of the district is Yale Theater and how it will once again become the crowd jewel of a burgeoning and revitalized urban district.

“This building is the trigger,” said Santiago Arzate Jr., who is the chairman of Calle Dos Cinco in Historic Capitol Hill. As Arzate named the district’s revitalization milestones, he explained leaders always knew a key to envisioning their vision for a thriving district was returning the Yale Theater to its former glory. Across the Oklahoma River, leaders took notes from theatre projects like the Plaza District’s Lyric Theatre and Uptown 23rd District’s Tower Theatre.

“What they basically created were pillars in their districts,” Arzate said. “That’s what we are trying to do. The education aspect is established big time here with Oklahoma City Community College, but what we need is to fill in with entertainment and arts elements. We are focused on people who want to bring that.”

That’s where developers Aimee Ahpeatone and Steve Mason came in, purchasing the theater property, 227 SW 25th St. The two plan to rehabilitate the theater to its “Art Deco grandeur” as an event space, according to Mason, who has contributed to projects in Automobile Alley and Plaza District.

The vision of Ahpeatone and Mason is exactly what Arzate and leaders of Calle Dos Cinco were seeking. The project will not only revitalize the theater, but also enhance the corridor by stimulating business growth and attracting new visitors, he said.

“We are just trying to take the next steps as a community,” Arzate said. “We are 100 percent behind Steve and Aimee and everything they are doing for this community. This is a big step. I can’t wait to see it in its full glory.” 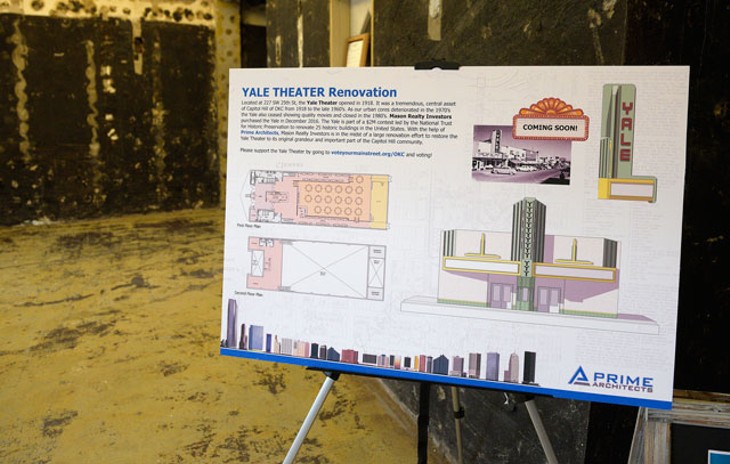 When Ahpeatone and Mason were first led through the theater building, they saw bright street light fixtures along the black painted walls. It is believed that the last audiences to enjoy a film in the theater was sometime during the ‘80s. In more recent years, the theater space was utilized as a professional wrestling venue.

It was far from the historical accents that any developer would hope to find in a historic theater. With a location in a historic district where leaders were committed to preservation and building an urban destination, coupled with immense community interest in the future of the theater, it was a project worth pursuing, explained Ahpeatone.

“We knew we wanted to come to Capitol Hill,” said Ahpeatone, who is also an owner and counselor at Mosaic Mental Health located in the district. “When the theater was presented to us, it seemed like a no-brainer. When you revitalize a district, this is the kind of space people have been in and have memories. They don’t necessarily have a memory from a shoe store, but they do of movie theaters.”

What the theater lacks in its interior, its makes up for with its exterior marquee. Plans call to restore the existing front facade and famous Yale sign, which dates back to 1946.

“The architecture is gorgeous,” Mason said as he explained the uniqueness of Calle Dos Cinco in Historic Capitol Hill, which was not impacted by urban renewal efforts. “This district we didn’t tear down.”

According to Mason, the renovations will result in a thoroughly modern event space that pays homage to the historic theater.

The two developers predict the Yale Theater will host celebrations, such as weddings, anniversaries and quinceañeras, as well as fundraisers and community meetings. Those who live in the neighborhoods that surround the district will ultimately decided its uses, said Ahpeatone.

At last week’s open house, where Ahpeatone and Mason opened the theater for the community to see the before and envision the after, community support was evident as local leaders, business owners and neighbors piled in for a look.

“I think the important piece is for us to create that crown jewel in the neighborhood,” Ahpeatone said, “The one that brings people from different neighborhoods down to check it out.”

Through Oct. 31, the public can vote once a day for up to five projects at VoteYourMainStreet.org. Projects with the most votes could split grant funds from a pool of $1.5 million. The Yale Theater is the only Oklahoma project, but is one of several historic theater preservation projects.

When the Yale Theater reopens, it will join a long list of  the district’s revitalization efforts, which includes partnership with Oklahoma City Community College and involvement in the Oklahoma Arts Council’s Cultural District Initiative. More is coming. Ever since the Yale Theater renovation announcement, interest in the area has reached a new level, said Arzate, who points to the strong reputation of Ahpeatone and Mason.

“We have someone who has a vision to better the community and who wants to be involved in the community,” Arzate said speaking of Ahpeatone and Mason. “It’s a godsend.”

Arzate’s brother Marco Arzate, owner of Prestige Lighting Solutions located in the district, said the Yale Theater will draw people from across the metro into the district.

“It’s a historical market now,” he said of the theater, “but it is going to be a signature piece for Oklahoma City.”