YogaFest 2017 introduces the poses and promises of flexibility 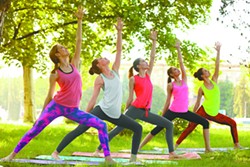 YogaFest 2017 offers classes for all skill levels as well as demos, a yoga marketplace, kids yoga, food trucks and music.

The festival has expanded over the past four years, moving to a larger venue each year. The first YogaFest was held in the Paseo Arts District during the Paseo Arts Festival in 2013. The second year, it moved to Coles Garden and the third was held at YogaLAB, one of McQuaid’s two yoga studios.

“I was a professional musician before this, and you spend three hours in a chair practicing every day, and it’s very much intellectual and mental, so I needed a way personally to get into my body and feel better,” McQuaid said.

There are 12 recognized yoga styles, and YogaFest will give attendees an opportunity to sample these with different local teachers.

“I’m not comfortable saying that it’s the best form of physical exercise there is, but it’s very integrated physically. Its physical, it’s mental; it’s mind, body and spirit, McQuaid said. “It’s a different experience than any kind of exercise I’ve ever done.”

“We’re just trying to celebrate everything we have to offer as a local yoga community,” McQuaid said. “Rather than bringing in a rock star yoga teacher from New York City or something like that, we’ve got a lot of great teachers here.”

Two tents will feature various forms of yoga, including Kundalini and Hatha. Other sessions include Ayurveda, an Indian science of health.

Parents can drop their children off with the Yoga Fairy in the kids’ yoga venue so they can relax and enjoy the festival. Children can learn about yoga through music, crafts, story time and anatomy.

At 7 p.m., guitarist Edgar Cruz will play during the yoga class while painter Samantha Carlton does a live painting based on the vibe of the class.

McQuaid and Glenn also think it’s a great way to instill a sense of community amongst Oklahoma City’s yogis, which happens to be the theme of YogaFest.

print headline: Get bent, YogaFest 2017 introduces the poses and promises of flexibility.