You In Me isn’t just any Neil Diamond tribute act. It makes heartlights shine

Alan Novey is a self-described Neil Diamond superfan, but not to the point of being crazed.

Sure, his tribute act You In Me, formed in 2011 with Flaming Lips multi-instrumentalist Steven Drozd, shows a level of dedication that’s a notch above any average enthusiast. And while hundreds of 45 rpm vinyl pressings of the duo’s eerily Diamond-esque original singles “The Drifter” and “Hot Coffee (and Mornin’ Lovin’)” might occupy Drozd’s garage and other dusty record collections in the metro area and beyond, Novey insists their obsession is a manageable one.

He has watched the touring veteran perform hits “Sweet Caroline,” “Cracklin’ Rosie” and “I Am... I Said” during at least three of Diamond’s prior OKC tour stops. Novey said he has witnessed many middle-aged female fans throw lingerie and hotel keys onstage while the 76-year-old singer performed, sometimes with their husbands right next to them.

“I always wondered how Neil was going to know what hotel room it was,” Novey said. “Like, do you have to write the room number on there?”

Novey’s day job is video production (he has assisted The Lips in several video projects), and he has turned his fair share of heads with his online videos in which he mimics Diamond’s distinguished, textured voice. In December, You In Me unveiled its Yuletide jingle “(You Are) My Christmas Wish.”

“Hey yah, hey yaaaa, hey yah hey,” he warbles — a playful nod to Diamond’s trademark ad-libs. “You are my Christmas gift; I gave you my Christmas love.”

Three songs and hundreds of vinyl pressings later, some wonder about Novey’s motive. He said it’s nice to get a few laughs while paying homage to one of his all-time favorite artists.

It’s also a plus to work with Drozd, whose love for Diamond matches — if not exceeds — Novey’s.

But above all, Novey said, You In Me’s main objective is to earn Diamond’s attention and approval. He’s confident Diamond would appreciate their work — if only he knew of it.

Novey grew up listening to his father’s Diamond albums but became a devoted superfan while in college.

He would later become a practical karaoke pro, but as a young man in the early 2000s, Novey didn’t recognize many of the tunes available at local karaoke joints like Cookie’s and what is now known as Nancy’s 57th Street Lighthouse. But he did recognize his dad’s old Diamond favorites.

People immediately began to tell him how much he sounded like Diamond. While Novey admitted he thinks they share some vocal similarities, his familiar, Diamond-esque tunes are more like impressions than duplicates.

After college, Novey met Drozd through his video work with The Lips. The men bonded over their mutual admiration of Diamond and would perform the icon’s hits at Drozd’s private holiday parties.

One day, without any expectation from Novey, Drozd called and said he wrote an original song as a shared Diamond tribute. They recorded “The Drifter,” along with “Hot Coffee,” at Drozd’s home studio.

“We had met several times, but we had never hung out one-on-one before, so that made it a little awkward,” Drozd said during a recent Oklahoma Gazette phone interview. “But now we’re a lot closer.”

The duo later decided to get the songs pressed into vinyl 45s. The company rejected their first attempt, saying it wasn’t allowed to press Diamond’s copyrighted material.

“They really thought it was Neil Diamond,” Novey said of the 2011 release. “We had to sign these affidavits saying, ‘Hey, no; relax. This is not Neil Diamond. We’re a tribute group.’”

You In Me finally released its follow-up in December. Reconciling their schedules between work and family commitments is challenging, especially for Drozd. In preparation for Diamond’s return to Oklahoma City, Novey said they recorded “My Christmas Wish” in a few days, hoping fresh material might help them catch his attention.

“We had to try and stay relevant,” he said.

Perhaps the most interesting aspect of You In Me is the dynamic between Novey, a local karaoke enthusiast, and Drozd, a legitimate rock star.

“[Drozd] works so fast, and he’s patient as well,” Novey said. “I was a musician as a child in band and stuff, but I’m not a paid musician at all.”

The Flaming Lips instrumentalist said Novey is not a precision singer but does a great job of capturing the essence or idea of a sound, particularly the gruff and manly qualities that characterize a lot of Diamond’s late-’60s and early-’70s songs. Drozd recalled their first recording session and trying to get Novey to sing an exact melody.

While “The Drifter” represents mostly Drozd’s work, Novey has taken a greater hold of the creative reins and wrote the lyrics for “My Christmas Wish.”

As a teen, Drozd’s love of Diamond was emboldened by the singer’s lead role in The Jazz Singer, a lukewarm 1980 remake of the pioneering 1927 classic film featuring music by Al Jolson. The remake ran regularly on cable, and Drozd grew very familiar with Diamond’s performance.

There are many Diamond tribute bands and impersonators. Drozd said what separates You In Me from the rest is that it’s not a cover act and it isn’t trying to be the next best thing after the legend. Instead, the pair writes original songs — just as Diamond has done throughout much of his career — as if the artist had written them.

At its core, You In Me is a fun group, but it’s not about having fun at anyone else’s expense. Drozd said in this case, imitation is indeed the highest form of flattery, and he thinks Diamond would appreciate it.

“He seems to have a pretty sharp sense of humor,” he said.

Drozd said he wants You In Me to eventually be able to more consistently create new material.

Novey still hopes Diamond’s Oklahoma City stop, which might be part of one of his last national tours, will lead him to his goal of acknowledgement from the singer. He also admitted he dreams of singing on stage with him, but Novey said his real hope is that he could make it to Nancy’s with Diamond without telling anyone.

“I would start the song, and then Neil would come up and finish it,” he said. “Then we just drop the mic and have some whiskey shots.” 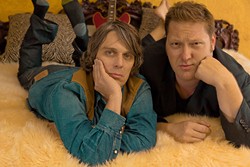 Print Headline: The feelin’, You In Me isn’t just any Neil Diamond tribute act. When a local karaoke singer and bona-fide rock star get together, heartlights shine.