Your Metropolitan Library System library card is a ticket to free streaming services for movies, audiobooks and music

As consumers continue cutting the cord to traditional cable television packages, there seems to be an endless supply of new streaming services competing to add another monthly charge to bank statements across the country.

Two new streaming services for movies, audiobooks and music are free. All you need is a library card.

“I thought it would be movies, but the audiobooks are super popular because they’re always available, unlike our other audiobook service Overdrive,” Terry said, noting that the library system only gets a certain number of digital licenses for each audiobook under Overdrive.

The number of users adopting Hoopla has more than doubled since the library made a marketing push in January. Over 2,500 people have signed up since the New Year, adding to the 1,872 people that signed up in 2017.

Top movie rentals on Hoopla include a documentary on the Broadway smash hit Hamilton, 2014’s fantasy musical Into the Woods and critically acclaimed 2017 release The Lost City of Z.

Hoopla is a digital subsidiary of Midwest Tape, a company that has provided physical DVDs and audiobooks to public libraries nationwide for decades, according to Variety. Hoopla debuted in 2013. It includes requisite phone and tablet applications, but the service recently added connectivity with Amazon’s Fire TV and Apple TV this past November.

MLS’ website includes weekly posts on its Dog-eared Blog for suggestions of top movies, audiobooks and comics to check out on Hoopla.

A Jan. 10 entry suggests checking out classic movies like Terry Gilliam’s futuristic Brazil, 2017’s Academy Award-winning documentary on James Baldwin I Am Not Your Negro and 1973 Best Picture winner The Sting.

As larger streaming services like Netflix and Hulu devote more resources to original content, older movies in their library are on the cutting block.

Kanopy was founded in Australia in 2008 and started as a partnership for university libraries before expanding to public libraries in 2017, according to Toronto Star. Kanopy’s service includes over 30,000 films.

Kanopy has found a niche by striking a deal with distributor Janus Films, which has a relationship with Criterion Collection and many classic movies. Available movies include the Akira Kurosawa psychological thriller Rashomon, Audrey Hepburn and Cary Grant vehicle Charade and a 15-film Ingmar Bergman collection, among many others.

“About a year ago, I really wanted to watch Donnie Darko because I hadn’t seen it in a long time,” Terry said. “I couldn’t find it on any other service, and I didn’t want to pay to watch it on Amazon. I found it on Kanopy recently along with all of these old, niche movies and more contemporary independent films.”

Kanopy joined the MLS in the last month. It also has a monthly restriction of six plays per month, and films are available for three days. 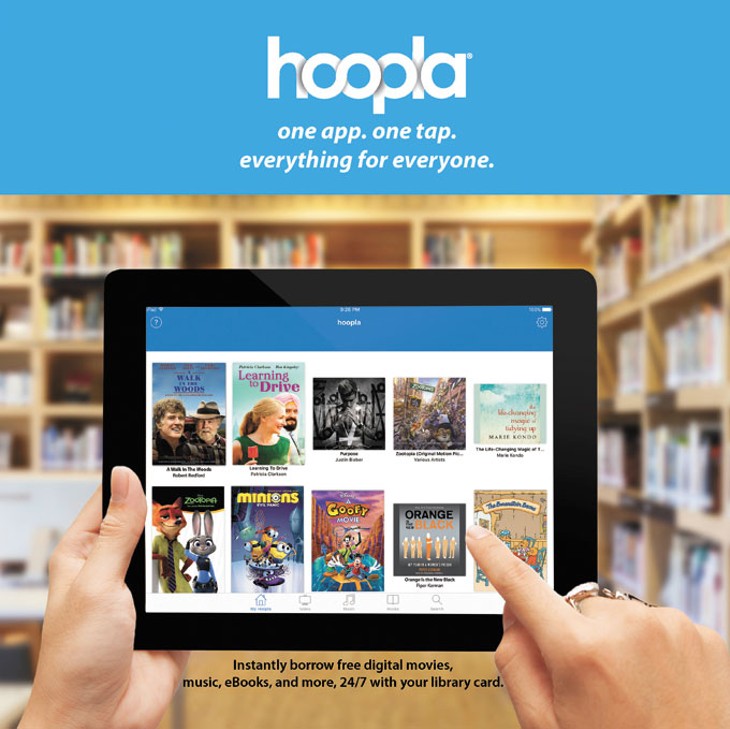 Hoopla and Kanopy are the latest in the digital push for MLS, which derives its funds from property taxes.

“We want to be an important part of the community at all of our 19 locations; whether it is the physical building or our virtual library, we want people to use our services,” Terry said. “A lot of things are going digital, and you don’t even have to come into the library. Once they are aware of those services, they will pay more attention to us. It’s interesting; when I first got here 12 years ago, the majority (of the budget) was all going to physical materials, and now they’re dividing it up.”

For many people, the library is the first place they’re introduced to such technology. Staff is trained to help people who have trouble downloading the application on smartphones and tablets.

Sign-up is through third-party websites, which has led to some confusion when both Kanopy and Hoopla ask for a pin number in addition to the user’s library card number. The pin number is the user’s last name.