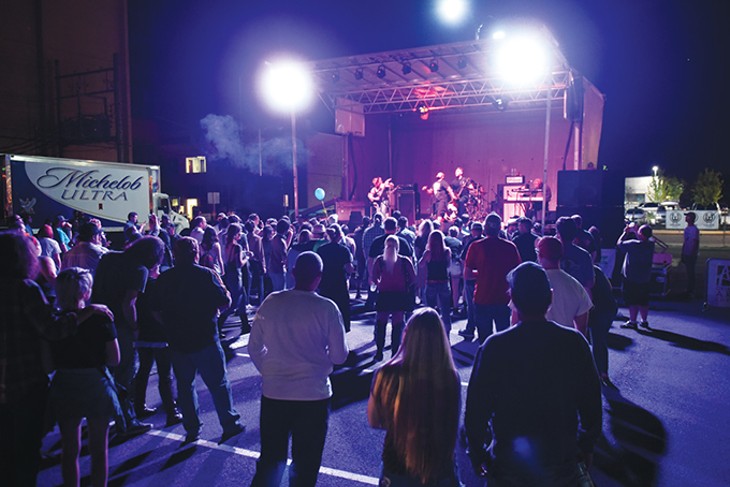 Like a lot of people moving to Norman for the first time, her experience in the city began as a new University of Oklahoma (OU) student living in campus dorms. Eventually, she moved out into an apartment on Campus Corner and later into a series of duplexes ranging in size from 500 to 850 square feet.

Despite spending six years of her life in Norman, Knick has been living with her husband in Oklahoma City for the last two years. She said finding a place to rent in OKC is a lot easier than in Norman, where everything seems to operate on the ebbs and flows of the semester schedule.

“Most rentals that open up in the summer [in Norman] get rented out during spring break,” Knick said. “We would have to look for a place months in advance. Not so much in OKC; our window of searching was narrowed to about two weeks.”

Norman Economic Development Coalition (NEDC) recently commissioned a study that found a 1.5 percent dip in the city’s 25-34 age bracket between 2011 and 2016. It is not the trend one would expect to see in the home of the state’s largest public university.

After graduating with an art degree in 2015, Knick became an employee of OU School of Art and Art History. But after two years of living in Norman as a non-student, she was ready to move back into a bigger city environment.

“Norman was starting to feel so small and claustrophobic,” she said. “Careerwise, I had reached a point where I was ready to move on to a larger city with more opportunities. I didn’t want to leave Oklahoma yet, so OKC seemed like the next step.”

Jason Smith, chief executive officer of NEDC, said there is data to support all kinds of different angles on the city’s ability to attract and maintain millennials and young professionals.

“The main issue that we’re concerned with right now as a community is making sure we have the kind of people necessary to fill the jobs that our employers have,” he said.

Smith said Norman is home to a number of different growing companies. The coalition often hears these companies saying it is becoming harder and harder to find the skilled workforce to fill their jobs.

It is not really a problem unique to Norman. Smith said building and maintaining a skilled workforce is an issue in many cities and states around the country.

However, the unique challenge Norman does face is its proximity to Oklahoma City and other destinations in the metropolitan area that have their own ability to attract young workers.

Smith said in some ways, it is great that other areas in the metro have progressed because advancement and development benefits everyone in the area. But Norman must keep pace with this progress.

“It’s also incumbent on us and other communities to make the same kind of advancements to stay competitive,” Smith said.

Aside from Norman’s workforce issues, Smith said the city faces a secondary problem in that millennials seem to prefer living in an urban setting. While NEDC is focused on labor of all ages, finding ways to keep the spending power of the future has emerged as a priority.

“As we’ve worked on those issues, we’ve also uncovered that there’s census data that shows we’re not as competitive as we used to be,” Smith said. “And we’ve done survey data with university students that shows about 3 percent of [OU] juniors and seniors are saying they’re going to be living in Norman after graduation.”

Smith said NEDC was generally in favor of the University Northpark development plan that would have accompanied the construction of a new OU basketball arena. Though he thinks the city is already positioned well in terms of cool and unique attractions that would appeal to a younger crowd, he thinks the new development — a proposal that has recently been withdrawn from consideration — would have helped.

“At the end of the day,” he said, “we will not be able to attract jobs and entrepreneurs if we’re not able to keep our kids at home and be attractive as a place to live.”

Norman Chamber of Commerce president and CEO Scott Martin, like Knick, is a native of Tulsa. But after graduating from OU with his undergraduate degree in the 1990s, he never felt a need to leave the city.

Martin said one would think that Norman would have an advantage in millennial retention due to the fact that it has a university in its own backyard. But for myriad reasons, a lot of those students seem to be looking elsewhere after graduation.

“That’s certainly a cause for pause and to think about what that means for us today and also long-term,” he said.

Back when he was a student, Martin said the larger cities in Texas were usually seen as the biggest threat to taking Norman’s young professionals. But as OKC and other places in the metro area have grown, many students have likely found that they can leave the city of Norman without actually leaving it altogether.

“We’re finding that a lot of people are doing that,” Martin said. “Some of our businesses are discovering that many of their employees are working in Norman but living somewhere else. That doesn’t bode well for our schools, our taxbase, our city.”

Still, Martin said Norman has a lot to be excited about overall. Its downtown area has grown a lot within the last decade, and commercial districts are beginning to emerge elsewhere in the city. New businesses are popping up all the time, and many unique cultural events call the town home.

“There’s a lot to be interested in in Norman,” he said, “and I hope the people who live here take advantage of what we have to offer, but I also hope people outside our borders come and visit on a regular basis.”

Knick praised Norman for being a place where young people can get the hang of adulthood. It is a small enough town that is easy enough to navigate but not so small that there aren’t plenty of entertainment options.

She said forward-thinking cultural entities like Norman Music Festival, Resonator Institute and Jazz in June are all a major draw, but they are not enough on their own.

“If you look past the diverse, educated, socially engaged population creating and attending these culturally rich venues and events, you realize very quickly that Norman is still a small conservative town in the middle of the country,” Knick said. “Its goals as a town don’t really align with the needs and values of millennials.”

She suggested Norman be proactive in bringing more long-term job, internship and mentorship opportunities into the area to satisfy a population eager to get plugged into something. Also, the construction of affordable housing options for young professionals graduating with considerable college debt would be helpful.

As much as anything else, Knick just wants millennial interests given a platform that is heard by others and seriously considered.

“Try to strengthen the connection between OU and the Norman community,” she said. “Have more than one record shop and one less sports bar. I don’t know; just some ideas.”