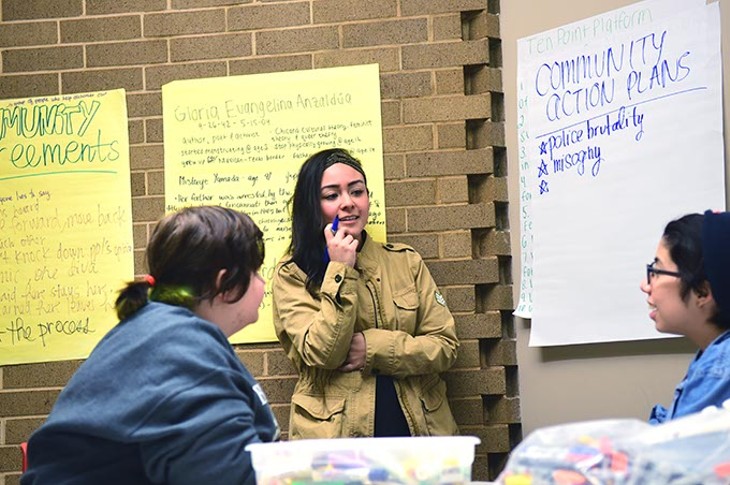 All Lena Khader wants to do is give high school students a safe place to share their thoughts and feel accepted and provide them with a community many of them do not have in their personal lives. At 23 years old, Khader has run a mentoring program, Making HERstory, once a week in south Oklahoma City for the last year and a half.

Khader remembers what it felt like to be a teenager and often be unheard. Even though she was an honor student at U.S. Grant High School, people held the perception that most students there did not care about their education because the school was failing standardized test scores at the time.

“I felt like for so long, my voice was nonexistent or not cared about,” she said.

Early on, she realized the impact it had on her and the need for Oklahoma youth to share their voices. She also realized that change could come about through youth movements.

After graduating college, Khader took a year off from her studies and decided to teach at Upward Bound, a federally funded mentoring program. When she finished teaching the course, many of Khader’s students did not know where to go from there.

“I had already started working on creating Making HERstory but wasn’t sure if I wanted to stay in Oklahoma at the time,” Khader said.

After 95 percent of her students said they would attend Making HERstory gatherings if offered, she decided to commit her time and energy to creating a program in OKC.

Around 20 students show up each week, and the discussions that take place are lively and provoking. The students possess an eagerness to change and understand the world around them. Discussions about police brutality, racism, gender inequalities, problems in their schools and the realities of identifying as queer in Oklahoma take place in a judgment-free environment.

The group starts with the students gathering in a classroom at the library. Khader puts up posters around the room, all with various discussion points that have taken place over past group meetings.

Some posters have the history of the women’s rights movement, some have bullet points of issues that the LBGQT community faces, and another poster discusses how to organize within their community in a productive way that can incite change.

Once the meeting commences, Khader sets forth the topic the group will discuss that day.

In this particular meeting, the subject of police brutality is the main focus, and after an hour and half of discussion, Khader passes out the Black Panther Party Ten-Point Program. The group reads each point together and analyzes the points with consideration of each other’s opinions.

Seeing the posters around the room and the ideas that come from youth, one would be hard-pressed to not feel some inspiration.

“I am often amazed at the insight these young women and men have,” Khader said. “They have a spark within them to make a change that is exciting to be around.”

The group gives a support system that many otherwise would not have, Khader said. She also hopes to start a scholarship fund one day, especially since many of the students would be the first in their families to go to college.

“I believe in the future of these students. I hope I can continue to give them that space where expression is encouraged and where they can start to believe in themselves as well,” Khader said.

At 16 years old, Melissa at first seems shy, but when the topic of social injustices in her school comes up, she immediately perks up and shares her opinions in a constructive and thoughtful manner.

“I’ve learned not to care what other people think and that it’s okay to have opinions. I openly talk about being undocumented now and how that’s impacted my life. I’m not ashamed of it anymore. I want to make a difference too, the way Lena has,” she said.

Another student, Gwyn, 18, has never had problems expressing her opinions. But she feels that she is never respected at home or by her teachers or peers at school.

“I just feel like there is a lot of judgment and people don’t take the time to take me seriously. Here, I know my opinions and feelings are respected,” she said.

Michelle, who is 17 years old, says Making HERstory feels like home and the group has opened her up to new ideas.

“I used to think I would never want a woman to be president of the United States,” she said. “I just wanted things to stay the way they were because change felt uncomfortable. Now, since I’ve learned so much in here, I want a woman president one day because I want someone to represent me.”

“I wasn’t aware of a lot of things going on in the world, and now that I’m more aware, I have a better sense of myself,” she said.

Anna Kappel and Tori Bauman, both in their early 20s, help run Making HERstory. Both said that although they aren’t in high school, they still feel like they gain a lot from participating in the weekly group discussions.

“It’s definitely been a transformative experience. It offers the opportunity for me to grow as a person without being attacked,” Kappel said.

Participating in the group has inspired Bauman to one day go to law school and help change the world.

The group hopes that Making HERstory can one day become part of school curriculum.

“Every school has Key Club. So, I don’t see why Making HERstory couldn’t be part of all schools,” Gwyn said.

They all agree that they want Making HERstory to continue to grow and inspire youth in the OKC area to see that change is possible, even if you don’t have your driver’s license yet.