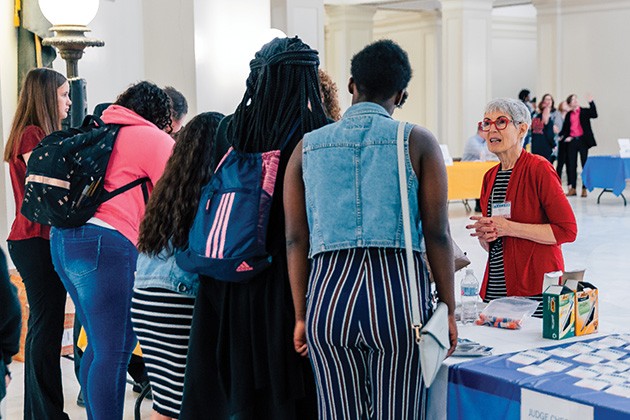 Several local civic groups teamed up to register voters at every Oklahoma City public high school next week. Part of a larger partnership between Generation Citizen and Oklahoma City Public Schools (OKCPS), the effort aims to empower young people to advocate for change.

“We’re a national civics education organization,” said Amy Curran, executive director of the statewide Generation Citizen branch. “Through curriculum and professional development, we work with students across the state to learn civics through what we call action civics. … They identify community issues that they see as important and then learn how government structures and elected officials work to affect change.”

“It will be a series of volunteers all trained by the League of Women Voters to receive the voter registration form. It will be open to parents, teachers and students,” Curran said. “It’s all really pushing us toward the shared vision of having our public schools being centers for civic engagement within each community and it being a safe place, an informed place to get your facts straight about what the process is.”

There is a gap in civic engagement when it comes to young people and people from marginalized communities, Curran said. That’s why it was important to create a safe space to register, have qualified people answering any questions and creating equity across the entire OKCPS district.

“They feel like their needs are not being met; therefore, they don’t vote, they don’t participate and they don’t hold their elected officials accountable, and they get even further from having their needs met,” she said. “We have a multi-prong approach to this. One is our curriculum, but the other is a policy and advocacy agenda about having informed voters. … All those things add up to higher percentages of young people voting and participating in their community.”

The event falls under OKC Equip, Generation Citizen’s partnership with OKCPS. Through its 20-week curriculum, students participate in identifying community issues, discussing them to find a consensus, finding root causes, selecting policy goals, identifying officials who can help with the goal and working on an action plan.

“We also recruit teachers, and they take part in a two-day, once a year for three years teacher institute where they learn everything from democratic classroom practices to how to have controversial conversations in the classroom, build consensus and do what we call PAR – participatory action research,” Curran said.

Generation Citizen is also teaming up with The Oklahoman to create a student editorial board on which students will learn media literacy, the importance of media in civic engagement and social media advocacy best practices.

“All of them will have written an op-ed by the time they finish their tenure with the board, and they will have all met with the editors and the newsroom staff twice during that time,” she said. “So there’s several small projects that all fall under this OKC Equip, and it’s really just making sure Oklahoma City young people are equipped with what they need to be really college- and career-ready but also physically ready to participate when they graduate high school.”

Civics and current events used to be a much bigger part of public education, Curran said, but as time went on, it became less of a priority, which led to students feeling like government wasn’t an effective way to make change in their communities.

“The whole idea was that young people would be ready to go out into the world as active members of their community,” she said. “That fell off in the late ’60s, early ’70s across the country for a lot of different reasons. … Then in states like Oklahoma, where we have to also consider our limitations on education funding, they were also not able to provide high-quality professional development to our social studies teachers. All of those things created this problem where we have extreme lack of young people participating.”

But a Brown Center on Education Policy at Brookings Institution report from 2018 found that civic education has started to return to the classroom, particularly in the past two years. The report also asserts that “a controversial president and his controversial secretary of education” aroused even more passion on civic issues for young Americans.

“A horrific shooting at Marjory Stoneman Douglas High School in Florida sparked a wave of student demonstrations, culminating in hundreds of thousands of students descending on Washington, D.C., for the March for Our Lives,” the report reads. “These concerns have raised important questions about K-12 education in America. Are schools equipping students with the tools to become engaged, informed, and compassionate citizens? Are they equipping some students, or groups of students, better than others?”

The Center for Information & Research on Civic Learning and Engagement, another partner of Generation Citizen, reports that during the 2018 midterm elections, 31 percent of eligible young people voted compared to the 19.9 percent reported in 2014. This marked the “highest level of youth participating in a midterm cycle in at least the last 25 years.”

The increased voter turnout of young Americans is important, particularly at this point in time, Curran said. But the group ultimately wants to empower students to feel confident and know how to physically engage in local civics in various ways beyond just voting.

“Voting is very important particularly right now, but also just being able to testify at a school board meeting. You don’t have to be 18 to go to your school board and ask that they add sex ed to their curriculum,” she said. “We had last year during [legislative] session, five student projects turn into bills, and all five of them made it through committee. Two made it to the governor’s desk, and one of them was signed into law — it requires all school committees … to have training and identify and recognize the signs of human trafficking.

“What we’re hoping to achieve is that, by bringing all of us together in the robust way that was actually intended for public schools from the very beginning, students being ... engaged in their community and wanting to be changemakers and agencies of change. We’re also seeing them becoming more motivated to stay in school and to excel in school because now what they’re learning in math and what they learned in science is all feeding this drive to impact issues that they care about.”