Editor’s note: You’ve been served is an occasional feature spotlighting chefs, bartenders and others involved in making and serving food in Oklahoma City.

The life of a chef can be simultaneously nerve-wracking and mind-numbing. Great restaurants must serve hundreds or thousands of the same dish with consistent quality. As fast and as often as one must cook, he or she is still cooking the same thing over, and over and over again.

Dunzy has no formal training; instead, he traveled the route of so many chefs before him: a busboy, a dishwasher, slowly working his way up through the bowels of the restaurant industry, learning about how it works from the bottom to the top.

His resume reads like an Oklahoma City restaurant history lesson. He tried to get work at Deep Fork in the early aughts before catching on at Olé. He went to the Museum Cafe at the Oklahoma City Museum of Art.

“I had the fortune to work under a lot of good chefs,” he said. “Then I got to work at Ludivine when they first opened up. That’s where I picked up 85 percent of what I know.”

After spending time in the kitchens at both Packard’s New American Kitchen and, most recently, The Barrel, Dunzy was contacted by Guy Romo, who was consulting on changes to the staff and menu at Saints.

“He told me about the gig, and I spoke with [owner] Patrick [Ireland] and signed on,” Dunzy said.

What attracted him to the job was the ability to cook different foods, change the menu with the seasons and availability and forge a solid team in the kitchen.

“We are doing seasonal Irish food. That’s what Patrick wants, and we don’t stray from that too much,” he said. “So what we’re going to cook are the sorts of dishes you would get seasonally in Ireland.”

“Trying to find whatever grains are being used there at the time isn’t easy. Trying to find the proteins we’d eat if we were there isn’t easy,” Dunzy said. “Add on to that there’s no gas in the kitchen. It’s all electric. Everything we’re doing is with convection and induction.”

And he’s hooked. Because easy is fine for everybody else, but to keep his edge, he wants to continually challenge himself and his staff.

“If you’re not evolving, you’re not moving,” he said. “The challenge is to do something different than anyone else is doing.”

That’s a feat that gets harder every day in Oklahoma City, where the restaurant boom has rapidly expanded the city’s roster of eateries. Not every style and culture is represented, but those empty niches are quickly being filled.

Dunzy said it’s a shocking transformation from his youth, when he and his friends got a house on the north side of the city at age 17. Neighborhoods that were once dangerous are now walkable. The Paseo Arts District, the Asian District, Uptown 23rd and the Plaza District were all “scary.” Now, they’re some of the city’s most frequented corridors.

Restaurants are at the vanguard. People are willing to travel into unknown areas for food, which pushes the culinary bar ever higher. 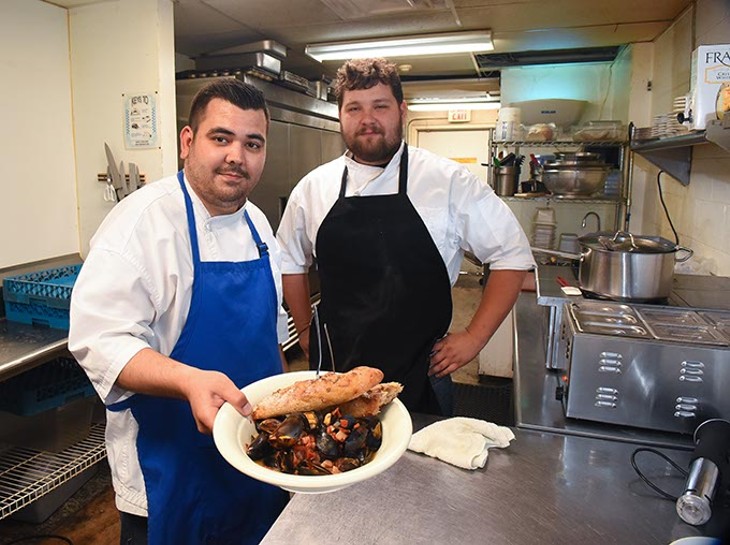 “Everyone is aiming in the same direction with a different spin,” he said, “and it’s tough. It’s tough to be original when everything has been done. How do you make it your own?”

Dunzy said he and Romo share a connection in their efforts to push the boundaries and explore new territories in the Oklahoma City market.

“It’s especially competitive in the Plaza District,” he said. “Look around and you’ll find a couple of vacant spots. So all Saints can do is grow. Because if we don’t grow, we lose everything.”

The footprint of the building won’t grow in size, but its diner base has to. One thing Dunzy hopes will resonate with customers is Saints’ efforts to minimize waste.

“I just want to make sure we use everything. There’s so much waste going on everywhere. Everything needs to be used,” he said. “That’s how you do justice to the animals, the ranchers, the farmers and the crops, to respect the time that goes into what they create.”

It’s not only responsible, it’s also good business. Using everything can lead to experimental, breakthrough dishes, but it also impacts profit by wringing all the worth out of each ingredient without sacrificing the guests’ enjoyment.

The menu is still in flux, though Dunzy is certain the steamed blue mussels — a new crowd favorite — will stay. Using pork belly diced like lardons and finished with Guinness and serving it with a bacon-rye sourdough baguette from Prairie Thunder has rendered it the restaurant’s newest hit.

Dunzy tries to keep the lines of creativity with his staff open. Romo helped bring on a solid staff, including Wes Cochran from Republic Gastropub, and Dunzy wants them to have a hand in the restaurant’s future. Staff “family” meals and snacks give everyone an opportunity to experiment and cook with the best items eyed as specials or permanent additions.

“It’s a small staff, but we’re tight-knit,” he said. “Everyone works really well together.”

And with Ireland handing over the reins of the kitchen, Dunzy said it’s up to him to make it successful.

“Patrick handed me the torch and said it’s my kitchen,” he said. “It’s the next best thing to having your own place. I don’t have to pay the bills — I just have to make it run well.”