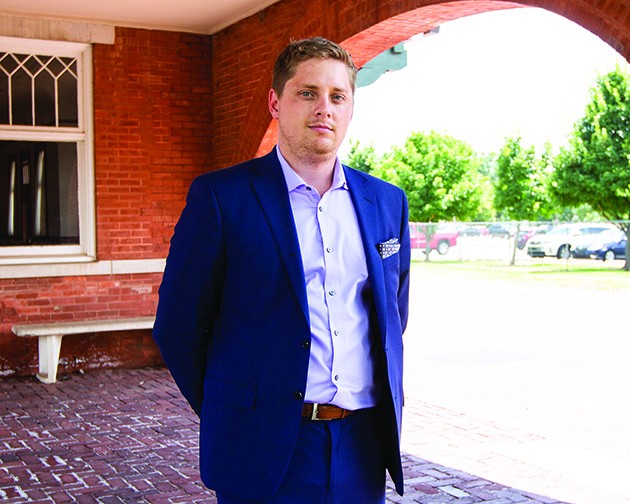 Clay Curtis found law school much easier than high school or college. An aspiring attorney since third grade, Curtis felt that the law almost always made sense. Because of his understanding, practice and advocacy of law, he was given the Clarence Darrow Award last month and named Criminal Defense Attorney of the Year by his peers in Oklahoma Criminal Defense Lawyers Association (OCDLA).

“I just was more inclined with that kind of education as opposed to, like, engineering or science. I just wasn’t quite as adept at that,” he said. “This was straightforward for me. I really loved to read, and I like the law. I think the coolest part about the law is that it almost always makes sense. The law is set up so that most often it will allow for justice, and occasionally there are a few instances where it doesn’t, and I think that’s what a jury is for. … There are a million problems with our system; don’t get me wrong. A lot of it is driven by money, so there’s a lot of that, but just in terms of what the law and the statute say, a lot of that makes sense.”

Curtis graduated from University of Oklahoma College of Law in 2011 and worked for Oklahoma County Public Defender’s Office for about six years. When he made the decision to leave, he carried over several of his cases at little or no cost. He then worked with Buxton Law Group before going on to form his own law firm.

“I really loved the public defender’s office. Obviously, that’s a really big part of my life,” he said. “A lot of the cases that I tried this last year that kind of led to that award were cases that I took for cheap or close to free, cases I kept from the public defender’s office. It was always hard to leave because there were always causes and cases I wanted to see to completion. I wanted to leave when I hit five years, but there was always a case or one more thing. So finally, when I decided to leave, I was like, ‘Well, I’m just going to keep the stuff I wanted,’ instead of having to make that choice and leave it behind.”

“Clay’s dedication to zealous advocacy on behalf of his clients — even in the midst of tremendous pressures imposed on his private life — is emblematic of those values that Clarence Darrow championed and toward which all criminal-defense lawyers aspire,” the nomination letter reads. “We are proud to propose Clay Curtis’s nomination for the 2019 Clarence Darrow Award because, like Darrow, he inspires us to fight harder in the search for justice.”

Johnson, who has known Curtis for almost 20 years, said 2018 was a difficult year for Curtis. He spent much of the year taking care of his father, who was an important figure to many members of Overman Legal Group, before he passed away. Curtis was later involved in an accident that almost resulted in him losing an arm. Now, he is undergoing physical therapy and will have to have surgeries.

“It was a hell of a year, and it was also his first year as sort of an independent professional,” Johnson said. “Over the course of that year, he continued to represent these capital murders that so many lawyers under similar circumstances would’ve pawned off on a friend or another attorney or just told the court, ‘I can’t handle it. This person is gonna have to go back to the public defender’s office.’ But Clay, while dealing with his own health problems and grieving the loss of his father, he racked up some pretty impressive victories. ... I think he’s a really unique story where his professional accomplishments — that I think would be really stunning in their own right — are amplified when compared to the pressures and stresses that he’s been under in his private life.”

September will mark Curtis’ eighth year of practicing law. He said the most humbling part of receiving the award is being named amongst the several recipients that came before.

“It’s a once-in-a-lifetime deal, so if you’ve won, you can never win again,” Curtis said. “I think that’s pretty awesome because, I mean, there are other lawyers out there who I feel are just as good, if not better, more experienced than me. … But those people can’t win again, so it’s pretty cool to be in the company. Almost all the best lawyers have at some point won this. … It’s really an award that focuses mainly on trial advocacy, so it’s not just like, ‘Oh, we think this person’s great.’”

Despite his good track record, Curtis said the wins in the courtroom are not the most fulfilling elements of the job.

“Even if you told me right now I would never lose another criminal trial, that wouldn’t fulfill what really drives me. What I think is most important to me in my career is wanting to change the conversation and change the way people look at this,” he said. “For my clients and in any individual case, they’re not chess pieces; they’re real people. I know that for them winning or getting the best results possible in the case, that is what drives me in terms of my individual representation of them. That’s always the goal, to get the best result we can. … But for me personally, what really drives me to be a lawyer and continue to do this, I would rather change the way people think about our criminal justice system.”

He worked at his own firm for just over a year before deciding to help found Overman Legal Group and Climb Collective, a cannabis industry consulting firm. Curtis knew most of the Overman attorneys for a long time before they formed the firm.

“Blake is brilliant. It’s unbelievable. He’s genuinely the smartest person I know,” Curtis said. “He has all this cannabis business, and he really gave us an opportunity to start something — something that I think we all had been dreaming of for a long time. … The truth is, I think no one’s ever really done anything like what we’re trying to do. We’re all young, I think we’re all really talented and I think we’re all really dedicated … sort of like the legal embodiment of what we would all hope to be: a progressive change in our city.”

With six attorneys on the team and another set to take the bar exam soon, Overman Legal Group covers several areas of practice, including drug offenses, civil litigation, murder and manslaughter, real estate and car accidents. Curtis said this will allow him to branch out from what he has done while continuing to develop his criminal defense, and Johnson said it will allow them to impact change in the community.

“We obviously have ambitions to be a serious powerhouse for sort of a criminal defense trial practice, and in particular with Clay’s focus, capital defenses,” Johnson said. “All of us are young and progressive, and all of us are ashamed to have inherited the Oklahoma prison population. We want to be leaders in our community. We inherited that situation; we have to do our small role in addressing it.

“We are looking at opportunities to take certain legal strategies to try to improve our community. We have, in some cases, a not very forward-thinking state Legislature, and I think we would all benefit if some smart and hungry attorneys were to dedicate themselves to the task of policing some of the most extreme stuff that happens.”