“Zorba’s has always been known for gyros,” he said. “But there’s so much more to the menu.” 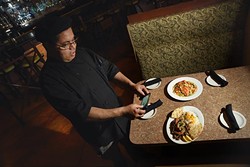 After more than a year at Zorba’s Mediterranean Cuisine, 6014 N. May Ave., Bennai has served countless gyros to hungry customers — and there’s nothing wrong with that.

“Zorba’s has always been known for gyros,” he said. “But there’s so much more to the menu.”

With 25 years in Oklahoma City, the restaurant built a loyal following for its gyros, falafel and kabobs. But as the business ages, Bennai said it needs to stay fresh to attract more customers.

The original Zorba’s was a tiny spot hidden away at 4621 N. May Ave. It was frequently filled to the brim at lunch as hungry strangers crowded into the dining room for pitas filled with freshly shaved and grilled meats and platters covered in colorful rice and skewered vegetables.

Wait times spiraled, though, as the customer base grew by leaps and bounds. Rather than expand on the old building, the owners chose a new spot up the road. And after much fanfare (and construction), the business reopened eight years ago with a lobby, a bar, a larger dining room and kitchen and a nearly identical menu.

“When Zorba’s opened, there was nobody else doing Mediterranean food,” Bennai said. “Now, it’s everywhere.”

So he’s working on a flavor injection by steadily increasing the selection on the menu to include different dishes and spices. The old favorites will never go away, but without new items, the business cannot evolve.

Ruby Rainbow Trout ($13) is just one example of his hand on the menu. A luscious filet of trout is seasoned and grilled before being laid over a buttery garlic vin blanc sauce with sautéed ribbons of zucchini and squash; carrots; red peppers; plump, bite-sized tomatoes; butter beans; and spinach.

Serving fish to red meat-centric OKC diners is always a risk, Bennai said, especially if it isn’t catfish, salmon or tilapia. But the mild trout combines the firmness of salmon with a gentle flavor that is easy for seafood neophytes to enjoy. And the sauce begs to be sopped up with a fresh pita.

Many regular dishes come from Bennai’s daily specials, including the chicken Marsala and the Greek chicken linguine. Sales feedback from customers tells him what they’d like to see stay on the menu and what can go.

But expanding the menu isn’t just about adding what he likes. It’s also about meeting customers halfway.

Some customers are set in their ways and will always just get the gyro platter, but he has got different options — a Florentine version in a creamy spinach sauce, a garlic version and even one tossed with shrimp scampi — to help them branch out. He’s hoping more choice will translate into customers who see the restaurant as more than a place to satisfy their occasional gyro cravings.

“People who come in once a month, I’d like to see them every two weeks,” he said. “It’s about giving people a reason to come here more often.”

Sometimes that includes taking away reasons that customers might stay away, as well. After 8 years in its current location, Zorba’s is reworking some interior furnishings to add renewed polish to the dining room.

“If someone walks out unsatisfied, that’s not just $8 or $12 we’re losing,” he said. “That’s thousands of dollars from the people they tell about their experience.”

Bennai said he’s committed not just to meeting customer expectations but exceeding them and helping push the envelope.

Soon, he said he will begin bringing in new seafood choices on the weekends to give customers a chance to find new favorites. And as an alumnus of both Cafe 501 and The Petroleum Club, he has the food resume to back him up.

He knows that’s what many people want when they come to Zorba’s. But that’s not going to stop him from taking the restaurant’s clientele on new culinary adventures ... even if they ultimately choose to have another gyro.

Chef Nordeen Bennai holds monthly wine dinners at Zorba’s in which he pairs different varietals with cuisines from around the world.

The next dinner is scheduled for May 21 and will feature the cuisine of Bennai’s native Morocco. “It’s like Christmas Eve for me; I get so excited,” he said. “I plan these months in advance, and I come out and talk to the diners between courses.”